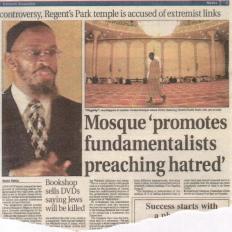 LONDON’S busiest mosque has been accused of promoting Islamic fundamentalists who vilify Jews, call for Sharia law in Britain, blame Christians for deliberately spreading Aids in Africa and preach intolerance towards all non-Muslims.

In one, Sheikh Feiz is seen imitating the snorting noises of a pig when referring to Jewish people, whom he says will be killed when the day of judgment arrives. He says: “This creature will say, ‘Oh Muslim’ behind me is the Jew. Come and kill him. They will be [makes snorting noises] all of them, every single one of them.”

Sheikh Yasin, a charismatic American convert, has said the koran calls for men to “beat women lightly” and told Muslims they should never regard non-Muslims as a friend. The controversial cleric is vaunted on the mosque’s official website alongside other “famous visitors” such as ministers Jack Straw and Mike O’Brien. In DVD footage, Sheikh Yasin says: “The whole delusion of equality of women is foolishness… there is no such thing.”

He also claims Western powers are behind the Aids epidemic in Africa. He says: “Missionaries from the World Health Organisation and Christian groups went into Africa and inoculated people for diphtheria, malaria, yellow fever and they put in the medicine the Aids virus, which is a conspiracy.”

Both men are linked to the Wahhabi brand of Islam, which is dominant in Saudi Arabia and well-funded. Wahhabis are some of the most radical and fundamentalist Muslims, believing in Sharia law and interpreting the koran literally. Moderate Muslims are deeply concerned about its spread to the UK.

Dispatches found strong links between the London mosque and Saudi Arabia. Its official bookshop is run by a firm called Dar-us-Salam Publications and its director general, Dr Ahmad Al-Dubayan, is a serving Saudi diplomat.

Allegations that the mosque is “controlled” by Saudi Arabia are backed up by Pakistan’s former High Commissioner to Britain, Wajid Shamsul Hasan. He says he quit as a trustee of the mosque in 1996 because of the growing Wahhabi influence and states:

“This is a centre where 5,000 people once in a week gather. It should be a cradle for the promotion of liberal Islam but, unfortunately, because of the predominant Saudi influence and Saudi money that comes in, it is supportive of Wahhabism.”

Dr Al-Dubayan was unavailable for comment and the mosque declined the opportunity to respond to the Evening Standard, but it is said to be preparing a statement for Dispatches.

The company that runs the bookstore said in a statement: “We sell and supply a wide range of material and we do not necessarily agree with it. It is totally unfair to blame [us] for any of the views expressed in these lectures.”

A community leader expressed his concern at the influence of the Wahhabi doctrine in Britain’s Muslim community. Dr Ghayasuddin Siddiqui of the Muslim Parliament in Britain called for the mosque to investigate the programme’s findings. He said: “It is well documented that the Saudi Arabians have funded large sums – as much as $75 billion (£38 billion) worldwide – in supporting this ideology.

“This has financially empowered the Wahhabi ideology, which is followed by no more than 15 per cent of Muslims in Britain. The director of the mosque must immediately investigate these claims and take appropriate action.”

But the Muslim Council of Britain defended the mosque. Its spokesman Inayat Bunglawala said: “It is a ludicrous claim that London Central Mosque has fallen under the influence of Wahhabism.

“All the imams there are Egyptian, not Saudi Arabian. The trustees are from different backgrounds, including Saudi Arabia, but the imams have always preached a tolerant message. It’s a flagship mosque.

“The bookshop is independent of the mosque. If it is selling material that is racist then that should removed but it is quite possible that the mosque has been completely unaware of what is on those DVDs.”

Undercover Mosques, Dispatches will be shown on Channel 4 at 8pm on Monday.