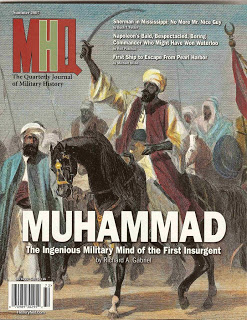 “This guy is a good example. So much of the treatment (especially on page 15) is so far off but have no time to elaborate. You read this article and you think that Zarqawi is the Prophet of Islam, and not Muhammad.”

As’ad AbuKhalil responds to the article “Muhammad: The Warrior Prophet” by one Richard A. Gabriel, in the military history magazine MHQ.