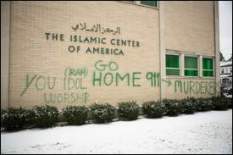 In a show of unity, religious leaders linked arms Thursday in front of a Detroit mosque that was vandalized this week with graffiti that read “Go Home 9-11 Murderers.”

Jewish, Christian, Muslim, and Arab leaders joined together at the old Islamic Center of America to condemn the attack, the latest in a string of crimes directed against Islamic houses of worship in metro Detroit. The attack on the center is “unacceptable to people of faith,” said Rabbi Josh Bennett, of Temple Israel in West Bloomfield.

The gathering was organized by the Detroit-based Interfaith Partners program of the Michigan Roundtable for Diversity and Inclusion. The attacks are “an expression of ignorance,” said the Rev. Dan Appleyard, of Christ Episcopal Church in Dearborn. Imad Hamad, regional director of the American-Arab Anti-Discrimination Committee, said Thursday’s event “was an example of America at its best.”