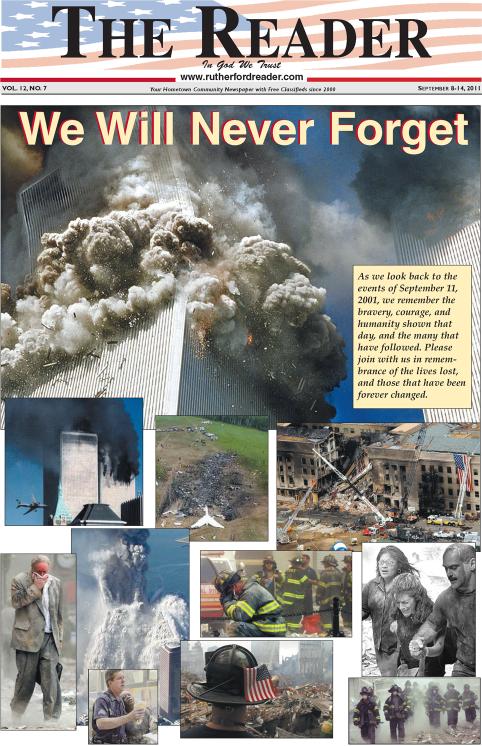 Over at the Huffington Post Janell Ross profiles Anthony Mijares, a Roman Catholic pensioner who has waged an admirable one-man campaign to persuade businesses and shops to boycott the Rutherford Reader, a rabidly Islamophobic free weekly newspaper that has played a prominent role in the right-wing propaganda war against the Islamic Center of Murfreesboro.

Ross quotes Peter Doughtie – the editor, publisher and owner of the Reader – as writing in last week’s issue:

“Muslims are not in America to assimilate. They are here to change our system…. Our preachers should go beyond telling us more than ‘we must love our enemies.’ That is simply passing the buck. They should be getting every Christian ready and armed with the Word of God and an understanding of the Quran and Hadith, to defeat those who are out to destroy Christianity, and our American way of life.”

The current edition of the Reader features a front page photomontage of the 9/11 attacks with the headline “We Will Never Forget”. Inside the paper a guest column by Pastor Darrel Whaley of the Kingdom Ministries Worship Center begins: “How can we forget 9/11 when the actions of Muslims, led by the teachings of Islam, continue to remind us. The United States alone has been under attack the past ten years on forty different occasions.” (Pastor Whaley’s further thoughts on Islam, Muslims and the Murfreesboro Islamic Center can be found here. For example: “There’s over twenty thousand Muslims in Middle Tennessee. But as the percentages of Muslims gets greater, a greater saturation, the possibility of them getting radical is going to increase. Because that’s the purpose of it – they want to take over America and the whole world.”)

Another columnist – one Tom Murrah of Toolsmartz, a blog that combines the promotion of evangelical Christianity with fascinating posts on the technicalities of woodworking machinery – writes: “In my opinion, those who attacked us on 9-11 were not ‘Islamic Radicals’ as everyone wants to paint them. They were true-blue followers of Islam. ‘Fundamentalists’? Yes you could call them that. They are following the message of the Quran, faithfully.” As for the claim that the Muslims involved in the Islamic Center of Murfreesboro are peaceful, “perhaps they are simply following the Quran and lying to us”.

The paper also includes two articles by Bill Warner of the Center for the Study of Political Islam, publishers of the handy 50-page guide Sharia Law for Non-Muslims (“If you want to lobby against Islam with any legislator, councilman, school board member, or politician, then Sharia Law for Non-Muslims is the perfect tool”). And another comment piece raises the scary prospect of a Muslim contesting the 2012 US presidential election (“President Abdul Hassan? It Could Happen!”)

In response to Anthony Mijares’s campaign the Rutherford Reader has run a series of full-page ads attacking him, and even published his home address – in circumstances where opponents of the Murfreesboro anti-mosque campaign have received death threats. But Mijares has refused to be intimidated. If there were an award for resisting Islamophobia in the US, then Anthony Mijares would surely be on the list of nominees.