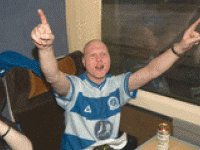 A local paper reports that the British Freedom Party has appointed a long-time EDL activist named Mark Dunbar as its organiser in the Essex town of Witham, which is of course currently under serious threat from the Muslim hordes.

It’s easy to laugh, but people living in places like this can be susceptible to the EDL/BFP’s Islamophobic propaganda precisely because they very rarely come into contact with an actual Muslim.

Postscript:  I’ve failed to find figures for the number of Muslims living in Witham, but according to the last available census there were only 409 Muslims in the whole of Braintree, compared with 98,116 Christians. Clearly, if Muslims are intent on imposing Islam on Witham they have a long way to go.