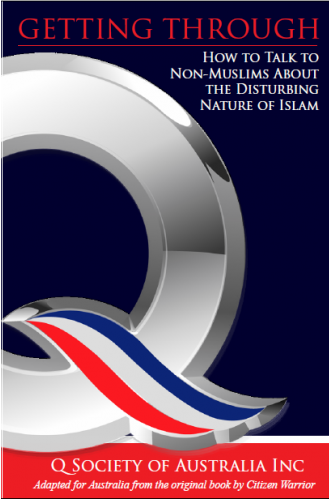 They are a group of “concerned citizens”, but are very hesitant to say who they really are. If you want to go to one of their meetings, you have to sign a nondisclosure agreement.

Their only address is a PO Box in suburban Melbourne. They won’t say exactly where their money comes from and say they never will.

And they are very opposed to Islam in Australia.

The secretive organisation known as the Q Society has this week been linked to a noisy campaign to stop the construction of a mosque in Bendigo, Victoria.

Over the past few weeks, some of the town’s businesses and residents have awoken to find black balloons tied up outside their premises as a way of protesting the proposed place of worship.

The $3 million development was approved last week at a raucous council meeting. There were reports indicating the Q Society was a “key force” behind the Bendigo campaign (the organisation says it only held a public meeting and was “not a protest organisation”).

The Q Society – named because the group was founded at a 2010 meeting in the upper class Melbourne suburb of Kew – claims to have members across the country. Its mission is about “educating” people about Islam, spokesman Andrew Horwood said, rather than leading the protests.

They describe themselves as “Islam-critical”, are avowed opponents of sharia law and have published a book Getting Through: How To Talk To Non Muslims About The Disturbing Nature of Islam and produced YouTube videos including “How to stop mosques”.

It has few public faces except for its president, Debbie Robinson, and Mr Horwood. “We’re purely educational,” he told news.com.au.

Keysar Trad, from the Islamic Friendship Association of Australia, said the group spreads “disturbing, baseless Islamophobia”. “I think most Australians would normally treat them as a joke but because there’s not enough information out there, not enough good information … about Islam, some people unfortunately subscribe to their message.”

The group is affiliated with an global organisation known as Stop The Islamisation of Nations (SION) – which, as the name suggests, is vehemently anti-Islamic.

The society has been in the headlines several times over the past few years due to its involvement in bringing right-wing Dutch politician Geert Wilders to speak in Australia. Mr Wilders has faced accusations of racial vilification after branding Islam as a violent religion and likening the Koran to Hitler’s Mein Kampf.

More than 20 venues he was to speak at last year withdrew their support after a firestorm over his visit. According to Mr Horwood, that’s a sign that Australia has been stifled by political correctness.

“You have to question in 2013 in Australia are people already scared to talk about Islam?” he said. “Are they fearful about what would happen if they discuss Islam? You have the riots in Sydney only 18 months ago. Actions like that make people fear (discussing) it.”

Mr Horwood said members’ security was one reason why the organisation employed secretive measures, such as refusing to name its supporters and nondisclosure agreements for members who attend meetings.

“It’s important in our industry that we understand who is actually there,” Mr Horwood said. “I’m sure you’re aware of what’s happening overseas with people under 24-hour armed guard. “We like to have an understanding of who’s attending our meetings.” 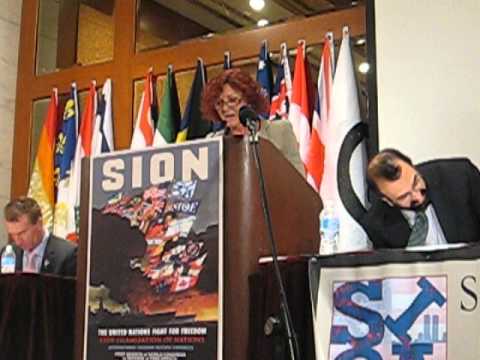 The Q Society’s Debbie Robinson at a SION conference in New York in September 2012, with (left) Kevin Carroll of the English Defence League and (right) Robert Spencer of Jihad Watch