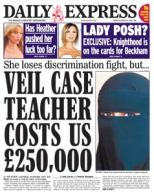 Aishah Azmi seems determined to pursue her warped agenda against the Church of England school that employs her all the way to the European Court – and the taxpayer will have to foot the legal bills.

Is it too much to hope that moderate Muslims will see what really lurks beneath this woman’s veil: not a victim with a genuine grievance but a politically motivated extremist who is doing terrible damage to their standing in the eyes of the long-suffering British public?

Editorial in the Daily Express, 20 October 2006

The bridge of her nose was all that could be seen of bolshie classroom assistant Aishah Azmi. Yet she was handed £1,100 of our money for refusing to remove her veil in school. She then had the gall to lecture US on integration.

What a ludicrous travesty of justice and common sense.

Why was this troublemaker prepared to remove the veil in order to get her job – but not after? How did the tribunal conclude she was a victim when she was the one who moved the goalposts? What message does this damaging ruling send to moderate Muslims who staunchly oppose the veil?

And how on earth could the panel be sure it was really her behind the black shroud covering her from top to toe?

The cult of victimhood has a new heroine. Aishah Azmi, the classroom assistant who insisted on wearing her niqab when in the presence of men (though not, apparently, when she was interviewed by a man for the job) has been awarded £1,100 for “injury to her feelings”.

Kirklees council had had the temerity to tell her to remove the veil when teaching because pupils said they found it hard to understand her. Mercifully, her claims of religious discrimination and harassment were thrown out. Yet that is unlikely to prevent Miss Azmi and her “supporters” proclaiming this as some sort of victory in an undeclared Holy War.

It is nothing of the sort. The wearing of a veil is a political and cultural statement, not a religious one, and the sooner this is more widely recognised, the less likely it will be that we have a repeat of this nonsense.