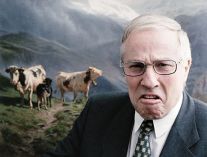 Switzerland’s rightwing People’s party, accused of racism and fanning Islamophobia, strengthened its position as the country’s leading political force yesterday, gaining more than 2 percentage points to win a general election for the second time in a row, according to projections.

Led by the populist industrialist Christoph Blocher, the People’s party, or SVP, was projected to have taken almost 29% of the vote, securing six more seats in parliament and two seats in the seven-strong cabinet that is always a coalition of the four strongest parties.