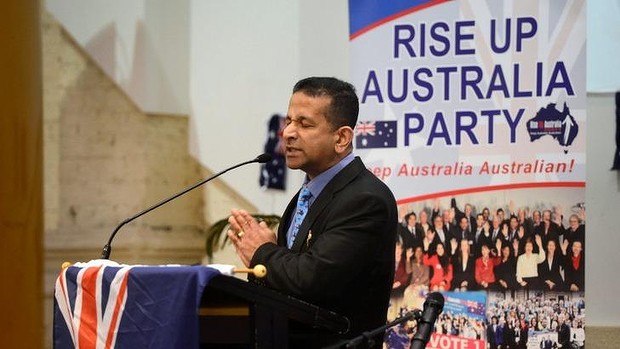 Rise Up Australia’s firebrand leader Danny Nalliah said he recently spoke to Mr Shaw and the balance-of-power MP would attend a party meeting in Frankston this weekend.

It comes as the anti-Islam party and the independent MP work to strike a preference deal ahead of November’s state election. “We will be preferencing each other,” Mr Nalliah told The Age. “I have known Geoff for 10 years. He says it as it is. I feel the treatment of him has been unfair.” A spokesman for Mr Shaw said he was unable to make any comment.

The flag-waving gathering at St Kilda town hall attracted an ethnically diverse crowd of about 100, with supporters from India, China, Hungary and Malaysia united by their fear of Islam. There was lots of rising up – for prayers, rounds of applause and the singing of the national anthem. Australian flags swayed as the crowd sang the party’s theme song.

Mr Nalliah, who is president of the Catch the Fire Ministries and previously blamed the Black Saturday bushfires on the state’s abortion laws, spoke out against sharia law and said he loved Muslims but not their religion. “Tony Abbott, our prime minister called the ISIS group in Iraq and Syria a death cult. I go one step further. I call Islam the death cult.”

“We are not against people coming into this country … but if you come here, embrace our way of life,” Nalliah told the crowd.

Mr Nalliah, who made a failed bid for a seat in the senate at last year’s federal election, said the party’s state election platform would focus on helping the depressed, minimising alcohol and drug use and protecting the “traditional family unit of father, mother and children”. He called for the reintroduction of corporal punishment in schools and “non-abusive” guidelines for disciplining children.

The party will field 40 candidates at the state election

The event’s guest of honour, Lord Christopher Monckton, said: “In the Rise Up Australia Party there is no such thing as political correctness.” He also slammed Victorian’s abortion laws, which he said were akin to torture and subjected children to pain.

The controversial speaker also criticised politicians who pulled out of the right-wing World Congress of Families event in Melbourne last month, saying they had bowed to media pressure. He said privately, politicians were lining up to organise preference deals with Rise Up’s leader.

Socially conservative parties Rise Up Australia Party, the Australian Christians and the DLP – who are all vying for upper house seats at the upcoming state election – signed an agreement last month to direct preferences to one other. They also vowed to help candidates who share similar views, particularly around abortion, which they oppose.