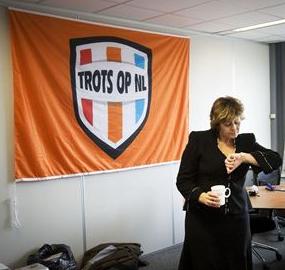 Right-wing populist politician Rita Verdonk is standing down as head of Trots op Nederland (proud of the Netherlands) the political party she founded in 2007, according to media reports on Friday.

TON number two Arthur van der Putte told the Volkskrant Verdonk is standing down. She had been due to announce her decision during a television current affairs show later on Friday evening.

Verdonk set up the party after losing the VVD leadership battle to Mark Rutte and being expelled from the right-wing Liberals. She lost her seat in parliament at the last general election but TON took around 50 seats in the most recent local elections.

Van der Putte said Verdonk had spoken to Geert Wilders, leader of the PVV, and was recommending remaining TON members and councillors switch to supporting the anti-Islam party.