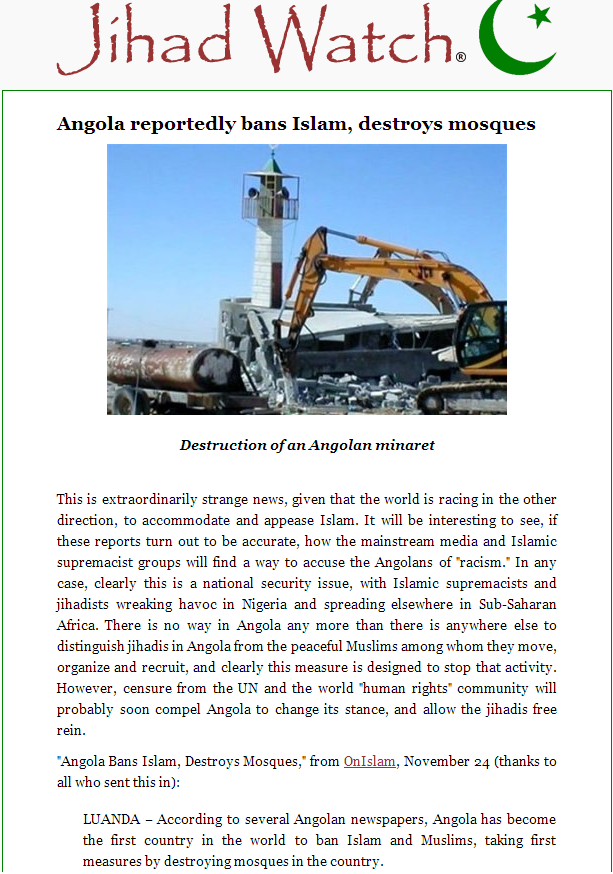 Reports that the government of Angola has “banned Islam” have been welcomed by Robert Spencer at Jihad Watch.

Beneath a photograph of an Angolan minaret being demolished, Spencer writes:

This is extraordinarily strange news, given that the world is racing in the other direction, to accommodate and appease Islam. It will be interesting to see, if these reports turn out to be accurate, how the mainstream media and Islamic supremacist groups will find a way to accuse the Angolans of “racism.” In any case, clearly this is a national security issue, with Islamic supremacists and jihadists wreaking havoc in Nigeria and spreading elsewhere in Sub-Saharan Africa. There is no way in Angola any more than there is anywhere else to distinguish jihadis in Angola from the peaceful Muslims among whom they move, organize and recruit, and clearly this measure is designed to stop that activity. However, censure from the UN and the world “human rights” community will probably soon compel Angola to change its stance, and allow the jihadis free rein.

Spencer’s usual claim is that he is opposed to Islam and those it inspires to violence, not to Muslims as such, and on occasion he will even say that he welcomes attempts by Muslim reformers to reframe their faith in non-violent terms. He also presents himself as a champion of free speech and equal rights. When he and his friend Pamela Geller were banned from the UK earlier this year, Spencer indignantly declared that “our work is dedicated to the defense of the freedom of speech and equality of rights for all”.

His response to the news from Angola provides a useful refutation of all those fraudulent claims. Spencer holds that there “no way in Angola any more than there is anywhere else to distinguish jihadis … from the peaceful Muslims among whom they move, organize and recruit” (emphasis added). So, in his view, not only is a ban on Muslims practising their religion entirely legitimate but the circumstances that justify that ban apply everywhere.

Spencer, it should be remembered, is currently supporting former English Defence League leader Stephen Lennon in his efforts to build a new organisation in the UK that has supposedly broken from the extremism of the EDL.

Update:  The Angolan government has denied that it has any intention of banning Islam. Reporting this news, Robert Spencer writes that “banning an entire belief system” would have become “a serious human rights issue”. He continues:

“… no one who is committed to the freedom of conscience can support such a ban, although the Angolans and everyone else are certainly within their rights to ban and work against elements of Sharia (or any other system) that contradict universal principles of human rights”.

But Spencer’s first response was that he did support the ban, as can be seen above. Now, it appears, he’s had second thoughts.

His friend Pamela Geller also seems to have had a change of heart. Her initial reaction was to endorse the Angolan government’s reported act of repression: “Angola is taking steps at self-preservation on a continent where countries are getting swallowed whole by jihadists enforcing the sharia. It’s a defensive move.” But she has now added Spencer’s latest statement saying a ban couldn’t be supported.