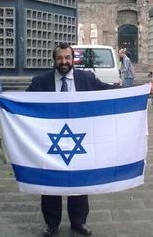 Robert Spencer of Jihad Watch was dead chuffed that he was recently invited to speak at a rally in Berlin organised by an outfit called Bürgerbewegung Pax Europa, which Spencer described as “the most important German human rights organization, seeking to preserve European values, freedom and democracy”.

LoonWatch examines the actual ideology of the BPE. They note “an emerging trend amongst some right-wing and fascist groups proclaiming their unconditional support for the state of Israel. What is likely is that many of these organizations, whose roots are steeped deep in a history of anti-Semitism are recreating themselves; dropping a now unpopular prejudice (anti-Semitism) for one more in vogue – anti-Muslim Islamophobia. Gone are the days when what they claimed to champion were the ‘Christian values and traditions of Europe’; now they have added ‘Christian-Jewish’ values to their slogans.”