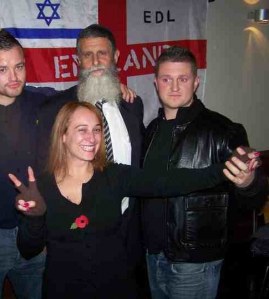 You may recall that a few weeks ago the English Defence League leadership had a bit of a falling out with the EDL Jewish division over the latter’s decision to ally itself with the far-right Jewish Task Force whose leader, Victor Vancier, served a five-year prison sentence in the US for a 1980s bombing campaign waged in protest against the treatment of Soviet Jews.

“A member of the Jewish Division this week decided to link herself with terrorist organisation JTF. This was the decision and wishes of one single individual within the EDL, and does not mean that the EDL is linked with this movement. If they continue with their plans to forge links with the terrorist JTF, the EDL will have no option but to sever its links with the Jewish division as we cannot support terrorist sympathisers.”

But hey, why let a minor matter like support for a convicted terrorist sour relations between the EDL and its Jewish division? Earlier today Roberta Moore reported on the Jewish division’s Facebook page that friendly co-operation has now been re-established with Tommy Robinson (Stephen Lennon) and Kevin Carroll, the joint leaders of the EDL:

“I went to a meeting with Tommy, Kevin and others of our counter-jihad group yesterday and it was great! We were filming a documentary for the Australian TV which will be shown on Sunday. After the filming we had a meeting to discuss our goals, tactics and the future of our country. I am very excited because the things we agreed last night were nothing like we have done before!”

What next? Will the EDL be rescinding its decision to sever connections with the English Nationalist Alliance? If the Jewish division is allowed to continue its assocation with a convicted terrorist, it is difficult to see why the ENA’s “links with Nazi groups like Combat 18 and Redwatch” should be an obstacle to further co-operation with the EDL. Particularly so, given that Moore herself is a founding committee member of the ENA and so far as we know still holds the post of “Co Chairperson, Political Liaison” in that organisation.

Update:  See also “The EDL has closer links to terrorism than 99.999% of British Muslims”, Exposing the English Defence League, 16 March 2011