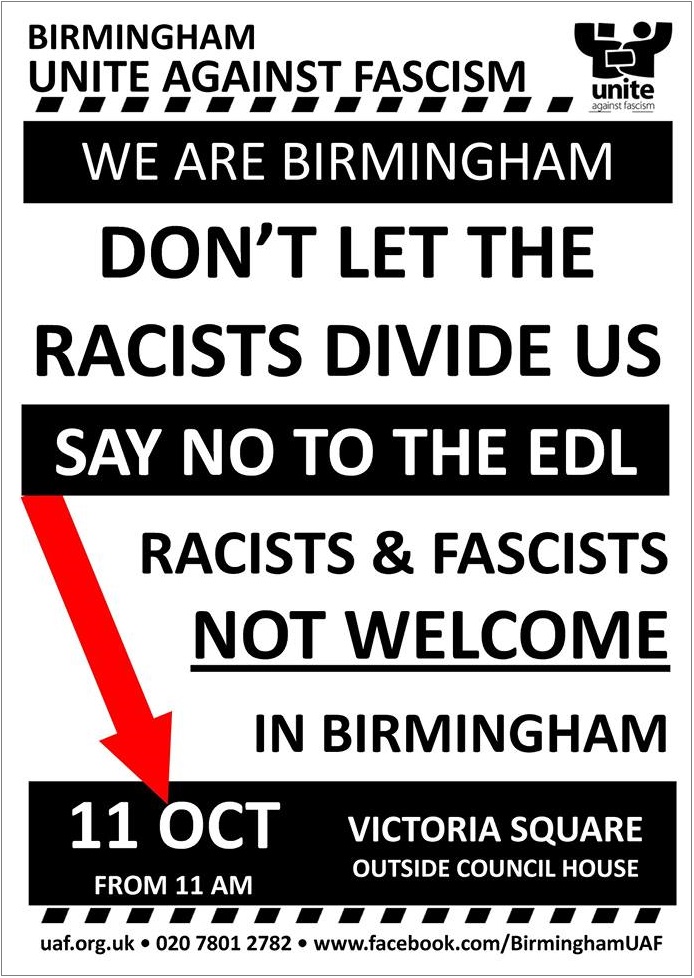 WE ARE BIRMINGHAM – DON’T LET THE EDL DIVIDE OUR COMMUNITIES

Statement
We, the undersigned, condemn the decision by the English Defence League (EDL) to come to Birmingham on Saturday 11th October. We believe it is a cynical attempt by the EDL to use the appalling crime of child sexual exploitation in Rotherham to further its own selfish ends. We support and seek justice for all victims of sexual exploitation regardless of their social or ethnic background. We condemn and seek prosecution of all those responsible for these crimes irrespective of their ethnicity or creed.

We reject the attempt by the EDL to whip up racism and division in our city by trying to turn communities against each other without a care for the damage it leaves in its wake.

“As has been stated many times before, there is no simple link between race and child sex exploitation….” (Pg 91)

We believe that the implementation of policies designed to prevent all forms of discrimination and racism has a crucial role to play in achieving justice and fairness in our society.

The EDL is a racist and fascist group dedicated to attacking Asian people and Muslims. Many former members of the fascist BNP, the Nazi National Front and other fascist organisations are active in the EDL and its splinter groups. These fascists and racists should be condemned and opposed. We must not give a quarter to those who would judge an entire religion, race or nationality by the actions of a few. Islamophobia – bigotry against Muslims – is as unacceptable as any other form of racism. Today they threaten Muslims, tomorrow it could be Jewish people, Hindus, Sikhs, black people, LGBT people, Travellers or Eastern Europeans.

We urge people of goodwill to support the ‘EDL not welcome in Birmingham’ statement and join the ‘We Are Birmingham – Don’t let the racists divide us’ unity demonstration on Saturday 11th October.