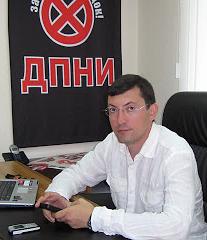 Nationalist organizations have criticized Moscow Chief Mufti Albir Krganov’s initiative to build more mosques in Russia to accommodate the needs of the large inflow of immigrants from Muslim countries.

“This approach is not totally correct,” chairman of the Russkiye movement’s supervisory board Alexander Belov [pictured] told Interfax on Tuesday.

“It is necessary to decide once and for all – whether Russia will turn into an Islamic state or will remain a secular state, where foreign immigrants come, find jobs and leave after their work is over,” he said.

“If immigrants live no one knows where but want to build a mosque in my yard, this approach is certainly wrong,” Belov said.

Russkiye is a coalition of various fascist and anti-migrant groups. According to a recent Friedrich Ebert Stiftung report by Alexander Verkhovsky, The Ultra-Right in Russia in 2012, the movement “combines legalistic sounding rhetoric against ‘migrants’, a term used to refer to all ‘ethnically foreign’ groups” with “undisguised neo-Nazism”.