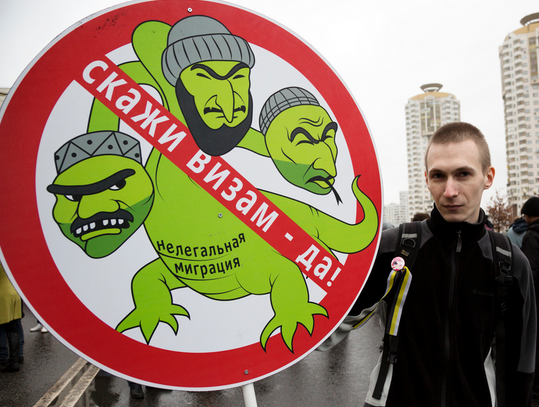 The Russian March, a yearly demonstration of Russian nationalist groups, was held Monday in Moscow and in 100 other cities across the country. Never before has this march been held amid so much xenophobia and intolerance in Russian society. Never before have members of the ruling elite, including members of the State Duma and the Kremlin, so publicly and openly made anti-­migrant and xenophobic statements. Not surprisingly, 40 percent of Russians now say they support holding the Russian March, according to a recent poll by the Levada Center.

The Moscow mayoral election campaign in August put the issue of illegal migration at the top of the political agenda. The recent riots in Biryulyovo were a logical culmination of an inflammatory election campaign focused on migrants.

We have already seen a sharp surge in violent attacks over the past year based on xenophobic, racist and nationalistic motives. Radical youth patrol suburban commuter trains, pull non-Slavic-looking passengers from the wagons and beat them on the platforms with bystanders looking on. The Spartak football club has been punished for an incident in which its fans displayed Nazi swastikas and staged a pogrom in the Yaroslavl stadium. A week ago, a group of young nationalists attacked trains traveling from Moscow to Dushanbe and Khujand.

According to Alexander Verkhovsky, head of the SOVA Center, which monitors xenophobia and violent crimes against ethnic minorities in the country, 10 people were murdered and 24 seriously injured in race-based hate crimes from May to July. From August to October, the number of victims of such crimes rose from 34 to 53. Verkhovsky attributes that rise directly to the openly xenophobic, anti-migrant rhetoric of the Moscow mayoral race, which gave Russian nationalism a healthy dose of political support.

According to SOVA, racist violence has resulted in 18 murders in the first 10 months of this year alone. That is same number of hate-related murders in as in all of 2012, indicating this will be a record year for such violence.

Russian public opinion is rapidly shifting toward the same aggressive intolerance. Levada Center reports that the number of people who support the statement “Russia is for Russians” has almost doubled in the last few years.

According to the latest Levada poll in October, the unrest in Biryulyovo was the single most noteworthy recent event for Muscovites, generating interest among 60 percent of respondents compared to the fewer than 30 percent who expressed interest in the recent mayoral race.

Despite the fact that Russia has been a multiethnic country for centuries, an increasing number of Russians today favor the monoethnic state suggested by the slogan “Russia is for Russians.” That idea finds support among 23 percent, or almost one-fourth, of the population and 43.4 percent of Muscovites, even though Moscow has always been a diverse, multiethnic city.

The mood against people from the Caucasus has grown extremely high, with 70.7 percent of Russians and 84 percent of Muscovites expressing support for the statement: “Stop sending federal money to the North Caucasus.” This is despite the fact that residents of the North Caucasus republic are full-fledged Russian citizens. Despite being Russian citizens, Caucasus natives are the most-hated ethnic group. Notably, Chechnya has remained a republic in the Russian Federation only because Moscow waged two bloody wars over the last two decades, conflicts that killed and maimed tens of thousands of people and created hundreds of thousands of refugees.

It is interesting that Russians are hostile not only to ethnic minorities, but also to fellow Russians coming from other regions of the country. In fact, more than 60 percent of Russians favor restricting those citizens from entering their region or city.

It is clear that the trend toward the disintegration of the country and society is dangerously gaining in both speed and strength. People of different ethnic backgrounds are increasingly unwilling to coexist and view each other as enemies. Exacerbating the problem, the authorities respond with greater force and repression while cutting investment in culture, education and community outreach programs. The government does virtually nothing to promote the integration of ethnic minorities in society or to promote tolerance. On the contrary, it would seem that it goes out of its way to promote intolerance and ethnic division in society.

Russian authorities have forgotten that the threads of an unraveling society cannot be woven back together with bayonets.