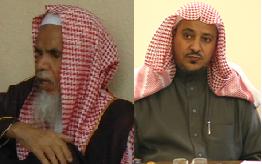 Andrew Gilligan has uncovered another dangerous extremist at the East London Mosque – Sheikh Saad al-Beraik, who who spoke at the ELM last week (and at the London Central Mosque too, as it happens).

After intensive googling, Gilligan has come up with a 2002 article from which he extracts the quote that provides his article’s headline. A single quote that appeared on a dubious website a decade ago isn’t much of a basis for denouncing Saad al-Beraik as an extremist threat, you might think.

Gilligan seems to have been aware of that problem. So, when he first posted it up last night, the article contained the following concluding paragraph: “Beraik was also one of those who ruled against supporting Usama Hasan, the Leyton cleric sentenced to death for supporting women’s rights to refuse to wear the veil.”

This has since been removed, but Gilligan has retained a link to a report in the East London Advertiser about a conference at the London Muslim Centre organised by the Tayyibun Institute, at which he claims Saad al-Beraik was an advertised speaker.

Here we have yet another example of Gilligan’s shoddy journalism, which has previously led to the Telegraph deleting one of his reports and apologising to ELM. In this case, Gilligan has confused two different people. The Shaykh Al Barrak mentioned in the newspaper report to which he links, and who criticised Usama Hasan, is another person entirely – Abdur Rahman al-Barrak – as a brief glance at the publicity for the Tayyibun event would have told Gilligan.

But why let the facts interfere with a yet another mindless exercise in anti-ELM witch-hunting?