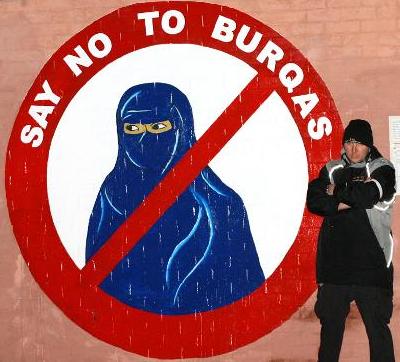 Security has been called in after tensions threatened to boil over a provocative mural to ban burqas at a Newtown workshop.

Following artist Sergio Redegalli’s painting opposing the Islamic face covering veils with the slogan “Say no to burqas”, security outside the premises has been called in after tensions threatened to boil over.

Police also attended the unit at Wilford and Station St after a female resident allegedly unleashed a foul mouthed tirade against the picture and attempted to deface it with paint.

Security guard Nathan Daniels, called in by Mr Redegalli to protect his work, said there had been a lot of abuse – nearly all from women. “The trouble has been mainly from feminists saying it was sexist and racist. This one woman was abusing the artist – shouting and swearing at him as well as making threats that she’s ‘going to get him’, so we had the police called in,” Mr Daniels said.

A resident, who did not want to be named in case of reprisals, said: “I’m only a pensioner but I would like to give the guy $50 for doing this. These people come to our country so the least they should do is try and integrate a bit. I don’t want to be named because I fear for the safety of my family and friends – everyone’s scared of them.”

Mr Redegalli said the painting was a rallying call against the creeping growth of extremism in Australia and was not anti-Islam. “It’s about the burqa and extremism and not Islam. This mural has come from frustration,” he said. “You can’t say anything about Muslims without getting in trouble.”