The Scottish Defence League is planning to demonstrate at Eastwood high school.

On Saturday January 25, members of the controversial group intend to gather to voice their concerns about a proposal to build a mosque in school grounds. The council decision on the subject is set for January 29.

An East Renfrewshire spokesman described the decision to demonstrate as “damaging to our communities and without local support”.

He continued: “A consultation with local residents around changes to a proposed site for a mosque has recently concluded. While there has been opposition to the site identified, the majority who disagreed were opposed only to a particular site and continue to support the view that a mosque is required in East Renfrewshire.

“This has been a robust consultation process on a local planning matter and nothing more. The attention of SDL is shameful and entirely for their own ends.”

However, an SDL spokesman argued that there is a need for the protest. He said: “We hope that our demonstration will influence their decision in favour of over 1,000 locals who have signed a petition against the proposed mosque.

“If the council chooses to ignore the locals, we will return for another larger demonstration to protest at their decision. We have no problem with local Muslims having a mosque in the Eastwood area but in a suitable location, not on the grounds of a school.

“Before anyone calls us racist; Islam is not a race, it’s a religion. We would also oppose any religious building on school grounds.”

Chief inspector Campbell Crawford refused to comment on the issue, but confirmed if the protest goes ahead, it will be policed appropriately.

A Scottish government reporter found there was “demand” for a Muslim facility in the area and ordered the council to work with the community identify a suitable site within three years.

Update:  The Scottish Defence League have announced that, in order to avoid a counter-demonstration by Unite Against Fascism, they held a flash protest on Saturday 18 January instead. As you can see from the photo below, it attracted the sort of derisory turnout we have come to expect at SDL events. 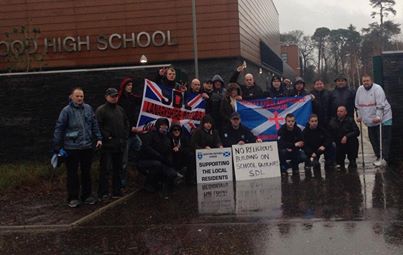