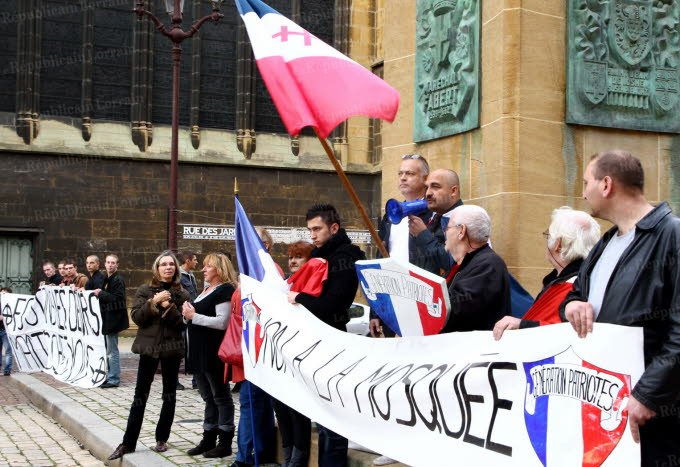 Following Génération Identitaire’s anti-Muslim stunt in the Lorraine capital of Metz, two other Islamophobic groups held an anti-mosque protest in the city last Saturday. Thankfully, as you can see from the photo, it didn’t attract much of a turnout.

The demonstration was initiated by Génération Patriotes and enthusiastically supported by Résistance Républicaine. You might think this is an odd alliance, as Résistance Républicaine is a front organisation for Riposte Laïque, a militantly secularist group, while Génération Patriotes is fiercely religious. The one claims to be advocating a hardline version of laïcité, while the other aggressively upholds the Christian heritage of France.

However the French far right has been redefining laïcité to incorporate the promotion of Christianity, precisely in order to facilitate unity in inciting hatred of Islam. The forthcoming Résistance Républicaine demonstration in Paris has been called to defend laïcité “and our other traditions”. In addition to supporting the 1905 law which established the separation of church and state, it has adopted the slogans “Hands off Christmas!” and “Hands off our Christian holidays!”

Update:  It appears that a third group participated in the demonstration. The protestors holding the banner in the background, on the left of the photograph, were from another organisation, Lorraine Nationaliste, who are openly fascist.

The reason they are demonstrating separately is that they are too far to the right even for Génération Patriotes and Résistance Républicaine, who didn’t want to be associated with them.

Here is the Lorraine Nationaliste banner. The slogans read “Get them out” and “Masters in our own house”. 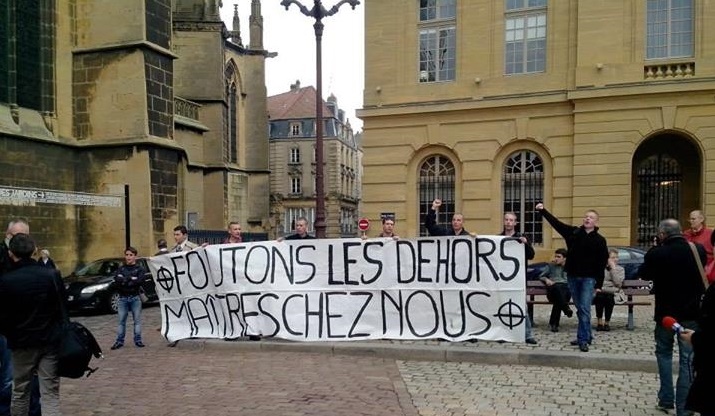