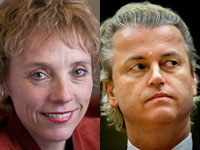 A senior civil servant with the infrastructure and environment ministry has resigned because she no longer wishes to be associated with the anti-Islam PVV.

Annemieke Nijhof, director general in charge of water policy, told the NRC she has no trouble with doing her job, but is finding it increasingly difficult to deal with the tone of the integration debate in the Netherlands. “The PVV describes 1.6 million of my fellow countrymen as fundamentalists who are threatening the rule of law,” she told the paper.

Nijhof said Iraqi friends she has known for 15 years are complaining about the more unpleasant social climate in the Netherlands. “It is becoming taboo to warn about this… I worry things will go downhill even more, and am very worried about the next election,” she told the paper.

Last year, research by civil service magazine Binnenlands Bestuurshowed 60% of government officials had difficulty with the involvement of the PVV in government.

The party is not a formal cabinet member but has an alliance with the VVD and Christian Democrats on economic and immigration policy.