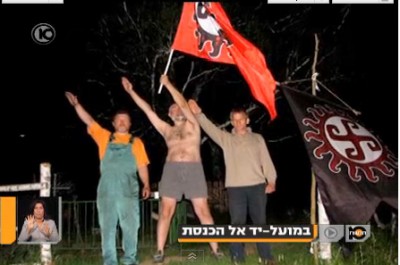 The close links that have been established between a section of the Israeli right and European far-right Islamophobes on the common ground of support for Zionism are well known (see for example here and here). But it is still difficult to credit the report that representatives of a Russian group of Hitler-admiring, Holocaust-denying neo-Nazis recently visited the Yad Vashem Holocaust memorial centre in Jerusalem and were welcomed to the Knesset by two of the most notorious anti-Muslim MKs, Aryeh Eldad and Ayoob Kara. Richard Silverstein has the details:

Under the auspices of Tuvia Lerner, editor of the Russian edition of Arutz 7, the media voice of the settler movement, they inveigled themselves an invitation to meet with far-right MKs Aryeh Eldad and Ayoob Kara. They also toured Yad VaShem without telling anyone there that they were Holocaust deniers. Like I told you, this story has to be read to be believed. The two Russians have been photographed giving Nazi salutes, celebrating Der Führer’s birthday, and they published songs of praise to Adolf Hitler on their website.

Naturally, when they met with the MKs the ideas they espoused were quite different.  One of the neo-Nazis told Israeli TV that the concept of Israel “excites me,” because it involves “an ancient people who took upon itself a pioneer project to revive a modern state and nation.” The TV reporter tartly asked how the neo-Nazi of yesterday suddenly became a Zionist. How they did it, is by finding a common enemy: Islam (sound familiar?). The second neo-Nazi tells the interviewer: “We’re talking about radical Islam which is the enemy of humanity, enemy of democracy, enemy of progress and of any sane society.”