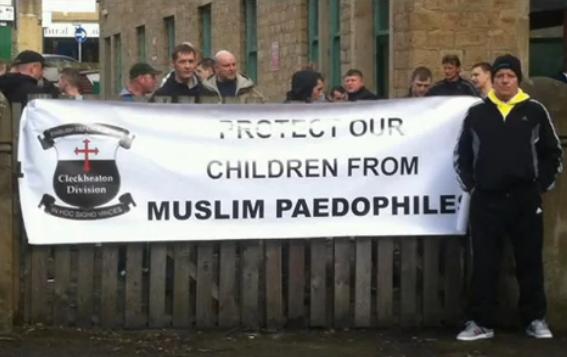 The EDL demonstration in Cleckheaton that preceded the racist attacks

Seven men have been locked up for causing trouble in Dewsbury and Heckmondwike after an English Defence League (EDL)demonstration in Cleckheaton.

The group, who were sentenced at Leeds Crown Court this morning, are all from Bradford. They attended the far-right group’s demonstration on March 17 last year.

Some went on to Heckmondwike and were involved in smashing a window at the Co-operative Travel in Northgate. All seven then went to the Principal pub in Dewsbury where Robert Collington, 27, hurled racist abuse at a passing motorist and his passenger.

Stephen Woodhead, 33, then spat on the passenger and Kevin Docherty, 39, threw his drink at the car as it drove away. Later, members of the group chased an Asian man along Corporation Street, Dewsbury, and beat him when he fell to the ground.

They were stopped by police as they made their way towards Savile Town.

All pleaded guilty at earlier hearings.

This morning they were given anti-social behaviour orders banning them from attending future EDL demonstrations for five years.

Sentencing, Judge Scott Wolstenholme said: “This was sustained and unprovoked racial violence by a group acting together in a crowded town centre which caused fear not only to the targets but to other passers-by.”

Collington, of Bedivere Road, Lower Grange, was given a 12 month jail sentence for violent disorder and causing racially aggravated fear of violence.

Docherty, of Grisedale Close, Great Horton, was sentenced to 18 months in prison for violent disorder and racially aggravated criminal damage.

Mark Peel, 34, of Bolton Hall Road, was given 12 months and 12 months for violent disorder, while David Lawler, 30, of Central Avenue, Shipley, was jailed for 13 months for the same offence.

Ben Phelps, 19, of Meadway, was sentenced to 10 months in a young offenders institution for violent disorder.