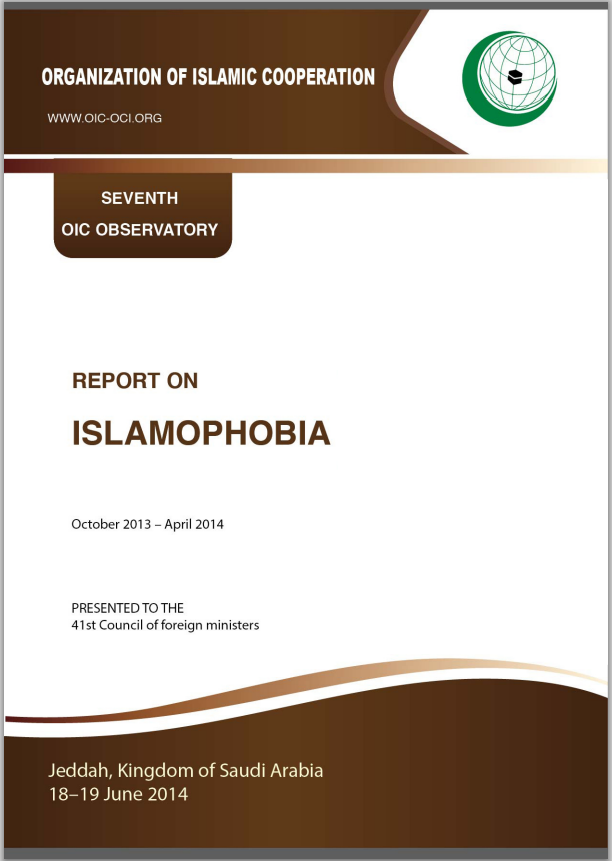 The OIC Observatory on Islamophobia released its Seventh Annual Report covering the period from October 2013 to April 2014 today at the commencement of the 41st Session of the Council of Foreign Ministers in Jeddah, Kingdom of Saudi Arabia. The Report illustrates that Islamophobia continues to manifest itself through different forms of prejudice and discrimination against Muslims both as individuals and as a community.

The Report includes five chapters that have identified contemporary manifestations of Islamophobia acknowledging both the negative trends as well as the good practices monitored by the Observatory over the reporting period.

In his foreword to the Report, the Secretary General, Mr. Iyad Amin Madani, while stressing the importance of pursuing the well acknowledged path crafted to address the issue of Islamophobia through HRC Resolution 16/18, he states, inter alia, “The OIC is of the view that pluralism and diversity constitute an opportunity for cultures and civilizations to open up, respectfully interact and better understand and enrich each other. Maintaining an open, respectful and constructive debate of ideas is key to our understanding of various forms and manifestations of intolerance as well as finding appropriate solutions to better address their negative impact. International community must cooperate at all levels to address this rising trend of discrimination based on religion or belief, which is also a threat to the values of pluralism, global peace and harmony.”

For this year’s Annual Report on Islamophobia, the Observatory decided to expand its scope of analysis and coverage taking into account the alarming incidents of manifestations of Islamophobia in many parts of the world, including the Rohingya issue, the situation of Muslims in Sri Lanka, the alleged ban of Islam in Angola, the fears of Tatar Muslims in Crimea, and the persecution of Muslims in the ongoing war in the Central African Republic. This may be a new trend influenced by some quarters of western media, which are propagating fascist and irresponsible anti-Islam hate discourses.

The Report in its conclusion mentions that the support of a section of political leaders and inaction on the part of some governments to take legal action against the perpetrators of Islamophobia in the west makes it rise and gain in strength. Such inaction helps propagate negative stereotypes regarding Islam, including the notion that Islam is linked to terror; that it is intolerant of other religious beliefs; that its values and practices are incompatible with modern democratic systems; that it favours repression of freedom of expression and that it undermines human rights.

Finally, special recommendations are put with a view to encouraging Muslim communities living in the West to do more to combat Islamophobia or any kind of xenophobic and racist discourses, which may have more chances to be successful with the support of OIC Member States. The Observatory is fully aware of the important role NGOs and civil society institutions play in present day international relations and issues of global concern. Therefore, Muslim communities are called to join hands with relevant NGOs and civil society organizations. Religious leaders, journalists, academics and diplomats are also important actors in combating the existing manipulation of faith and religious doctrine by extremist groups to justify violence and other obnoxious practices.