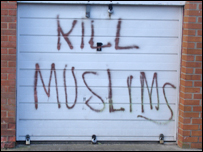 A Teesside family have returned from holiday to find their house daubed with anti-Muslim graffiti.

The Joacph family home and its neighbouring garage, in the Saltersgill area of Middlesbrough, were covered with messages. These claimed that the family were terrorists, and also called for the killing of Muslims.

The Joacphs, who are practising Roman Catholics, say they are devastated by the incident. Originally from India, they have lived in the area for three years.