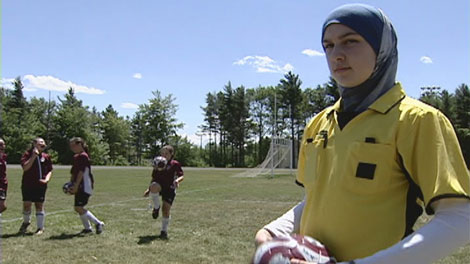 MONTREAL — A former Lac St. Louis soccer referee is blowing the whistle on rules she said prevent her from practising her religion.

Sarah Benkirane, 15, was told after two years of refereeing for the soccer association that she was out of a job, after a complaint surfaced over her wearing her hijab while calling games.

“For me it’s not really an option to take it off,” she explained of her traditional Muslim head scarf. “It’s part of my religion. It’s part of who I am. It’s the way I express myself, so I think I should be allowed to wear it as long as I’m not causing any harm to anybody else and I’m not.”

Under Rule 4 of the FIFA guidelines, which govern the Lac St. Louis Soccer Association, players must not only avoid wearing any item which threatens to cause choking or injury, but also “must not have any political, religious or personal statements.” All rules for players also pertain to referees under FIFA rules.

Edouard St. Lo, executive director of the Lac St. Louis Soccer Association said he agrees with the regulations. “It’s not just safety, because it does talk about political, religious and any kind of personal feeling that the person wants to display on the field. That’s why they’re all wearing the same thing,” he said.

Benkirane has drawn support from some parents, who have signed a petition allowing her to play. “Absolutely she should be able to wear it – it’s her choice,” said one mother.