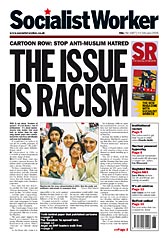 Lots of coverage of the Danish cartoons issue in this week’s Socialist Worker.

The front page article is headlined: “Cartoon Row: The Issue Is Racism”. Further relevant items are “Racism against Muslims has rocketed since 9/11” and “Cartoon caricatures were designed to offend”. Alex Callinicos contributes an article entitled “Freedom to spread hate?” And there’s a polemical piece from John Game on “Cultural Relativism”.

Game points to the double standards applied when it comes to Islam: “We live in a society where if a Catholic bishop talks reactionary nonsense about homosexuality there is some mild tut-tutting in the media. But if a Muslim does the same, articles are written about the ‘failure of multiculturalism’ and the need for Muslims to collectively embrace secularism.”