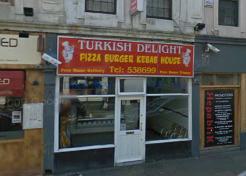 A young chef hurled racist abuse at a Turkish takeaway owner in a rant he said he was too drunk to remember.

In the barrage of insults against Erhan Yazgan’s race and faith, Darryl Moore, 22, declared: “I hate you and I hate Islamic people”. He continued his vile slurs at the owner of the popular Turkish Delight on Coronation Walk as his rants poured out onto the street outside the shop.

The insults started when Moore, of Balmoral Drive, Southport, went into the kebab house to get Mr Yazgan to call him a taxi at around 4.30am on September 10, 2011. Lynne Ingham, prosecuting, said: “He demanded a taxi. He appeared anxious. He went outside and came back in again asking about the taxi.”

Mr Yazgan recognised Moore from three years earlier when he had smashed a window at the shop. Mrs Ingham said that Moore had said: “See this window. My dad had to pay for this. Do you want me to smash it again?”

Moore’s taxi arrived but he didn’t get in it, and “seemed to want to fight”. A doorman from nightclub Sky Lounge, then stepped in.

Moore was convicted after pleading not guilty at trial.

Mr Yazgan, who has owned Turkish delight since 1995, said he had never known racism to this extent, leaving him “no choice” but to press charges.

Chair of the bench, Glenys Chiselle, said that the “threats” left Mr Yazgan in “fear of his safety”. She handed down a four month suspended sentence, ordered Moore to pay £840 in court costs and complete a “promoting human dignity” programme.