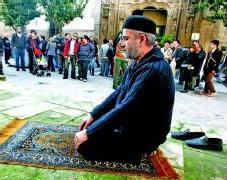 The Roman Catholic bishop of Cordoba in southern Spain has rejected an appeal from Muslims for the right to pray in the city’s cathedral, a former mosque.

Juan Jose Asenjo rejected the request made by Spain’s Islamic Board in a letter to the Pope. It had asked that the cathedral become an ecumenical temple where believers from all faiths could worship.

The bishop said such a move would not contribute to the peaceful co-existence between people of different religions. On the contrary, he said in a statement late on Wednesday, the joint use of temples and places of worship would only generate confusion amongst the faithful.

Spain’s Islamic Board, which represents a community of some 800,000 in a traditional Catholic country of 44 million, argued in its plea to the Pope that such a move in Cordoba could serve to “awake the conscience” of followers of both faiths and help bury past confrontations.

“What we wanted was not to take over that holy place, but to create in it, together with you and other faiths, an ecumenical space unique in the world which would have been of great significance in bringing peace to humanity,” the letter said.

The board’s general secretary, Mansur Escudero, said Muslims came from around the world to see Cordoba’s cathedral. But security guards often stopped Muslim worshippers from praying inside the old mosque, he added.

[The photo shows Mansur Escudero praying outside the cathedral following the bishop’s statement that Muslims will not be allowed to pray inside the building.]

BNP sympathiser Giraldus Cambrensis comments: “… now, once more, political Islam in Spain is trying to assert itself. The trial of the Moorish terrorists and their accomplices who attacked Madrid is due to start in the New Year. On Tuesday December 26, only a day after Spain celebrated Christmas, the birth of Christ, Spain’s Islamic Commission announced that it had decided to petition the new Pope, Benedict XVI, to allow Muslim worship at the Mezquita.”