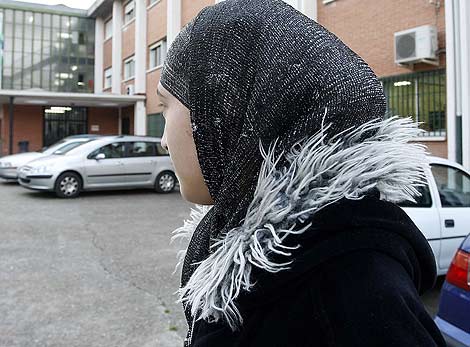 A 16-year-old schoolgirl has been banned from classes in Spain after refusing to remove her Islamic headscarf, re-igniting the national debate over the hijab.

Najwa Malha, who was born is Spain to Moroccan immigrants, has been excluded from classes at the state-run Camilo Jose Cela School in the Madrid suburb of Pozuelo after being told that her hijab was in violation of school dress code.

The decision has sparked debate in Spain where there are no clear guidelines over the wearing of Islamic headdress in state schools. The enforcement of dress codes is left up to individual school boards but previous cases of exclusion have been overturned by the state with the argument that the constitutional right to an educational overrides the school’s right to determine its own policies.

“I feel totally discriminated against,” said Miss Malha, who said she began wearing the hijab two months ago as an expression of her religious belief. Her father, Mohamed, told Spanish newspaper El Pais that he had originally objected to his daughter wearing the hijab to school. “I asked her to reconsider […] because I figured it would cause her problems,” he said.

Last November, a Muslim lawyer was ejected from Spain’s national court, where she was defending a client, because she refused to remove her headscarf.