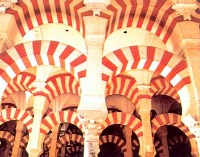 Spain will host a two-day international conference to discuss the roots of discrimination and hostility toward Muslims in the West. The conference is held under the aegis of the Organization for Security and Cooperation in Europe (OSCE) in the historical city of Cordoba in southern Spain, once the symbol of Islamic civilization in the Iberian peninsula.

High-ranking delegations from the 56 OSCE member states from Europe and Central Asia as well as non-governmental organizations will take part in the conference which focuses on intolerance toward Muslims, its consequences and the role of media, AFP reported. The event is part of Spanish Prime Minister Jose Luis Rodriguez Zapatero’s diplomatic push for an international effort to resolve cultural and religious differences, especially between the Western and Muslim world.