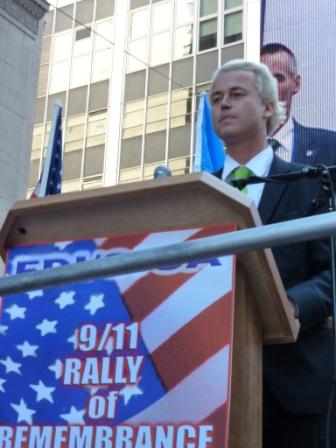 Geert Wilders’ interview with Der Spiegel, in which he accused Angela Merkel of “copying” his own anti-Islam rhetoric, has already attracted attention. Spiegel Online has now published an English translation of the interview. On the subject of Merkel’s attack on multiculturalism, Wilders states:

“My party and I are a threat to the political elite in many countries. But they will not stop us. Take a look at German Chancellor Angela Merkel who is now trying to create a copy….

“Merkel is afraid – because there are opinion polls which show that a charismatic figure, if one were to emerge in Germany as I have done in the Netherlands, could count on 20 percent of the vote. I mean a figure without a far right-wing background – in other words, not from the Republikaner (REP) or the National Democratic Party (NPD). This represents a threat to the mainstream political parties, which is why they are now trying to copy us: Merkel has declared that the multicultural society has failed….

“I have never heard her say before that the multicultural society has failed. And the majority of Germans reject the statement by German President Christian Wulff that Islam is part of Germany. This means that what we have already witnessed here in Holland is now occurring in your country as well – the political elite is in turmoil…. The head of Germany’s conservative Christian Social Union (CSU), Horst Seehofer, not only says that the multicultural society is dead, but also that he wants no more Turkish and Arab immigrants.”

The interview also provides a good illustration of how Wilders promotes a far-right racist message while at the same time formally distancing himself from racism and the far right. He says he rejects skin-colour-based prejudice, along with the genetic theories of Thilo Sarrazin. He is not hostile to Muslims, but only to the faith they follow, and this hostility is framed in cultural terms – non-Muslim Europeans should be “proud that our culture is better than Islamic culture”. Wilders states piously: “I don’t sow hatred.” He will have “absolutely nothing to do with far right-wing parties like the German Republikaner, Jean-Marie Le Pen’s Front National in France and the British National Party”.

This part of the interview did make me laugh, though:

SPIEGEL: Are you familiar with this quote from the Prophet? “But these enemies of mine, who did not want me to be their king, bring them here and slay them before me”?

Wilders: I have read many such passages.

SPIEGEL: The Prophet cited in this case was Jesus, from Luke, Chapter 19, Verse 27.