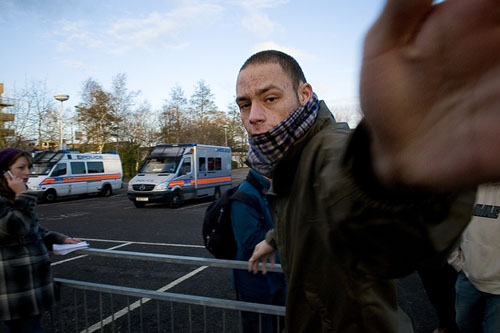 Over at Spiked, website of the ultra-leftists-turned-right-wing-libertarians formerly known as the Revolutionary Communist Party, Patrick Hayes expresses indignation over the imposition of an Anti-Social Behaviour Order (ASBO) on the EDL’s former youth leader at Uxbridge Magistrates Court last week.

“Over the next three years,” Hayes complains, “19-year-old Joel Titus is forbidden from attending any demonstration that is connected with the English Defence League or being ‘part of a group of 10 or more people whose actions could cause alarm or distress’. His ASBO from Uxbridge Magistrates Court also claims he must not ‘display a sign or placard or use defamatory or insulting language which could cause alarm or distress’…. He is also forbidden from entering mosques, Islamic prayer rooms or a defined area of Whitechapel in London.”

According to Hayes this is a “shocking restriction on someone’s democratic rights”. He demands: “What did Titus do to deserve such a punishment? Absolutely nothing EDL-related.”

But this is just not true. According to the Metropolitan Police report, the court imposed the ASBO after being “given details of a pattern of behaviour between 2009 and 2010, which were overwhelmingly related to English Defence League protests, where Titus’ behaviour was deemed to be causing alarm or distress” (emphasis added). The details are not provided in the police report, but it is in the nature of ASBOs that they are used to deal with a series of incidents involving anti-social behaviour which taken in isolation would not necessarily lead to prosecution.

A police spokesperson also stated that the ASBO on Titus showed that “we will not tolerate violence being used” at political demonstrations. And here we can point to a well-publicised case – Titus was cautioned for battery after assaulting photojournalist Marc Vallée at an EDL-supported Stop Islamisation of Europe protest outside Harrow Central Mosque in December 2009. This incident, together with his previous convictions for threatening behaviour and possession of a knife, was raised when Titus appeared in court in April to face charges arising from a brawl with rival football hooligans, and it was a factor in the court’s decision to impose a nine-month prison sentence on Titus after he was found guilty of affray. Evidently it contributed to the imposition of the ASBO too.

So here we have a man who has played a prominent role in the EDL, an organisation with a record of holding anti-Muslim demonstrations that frequently descend into violent hooliganism – as head of its youth section he was in a position of leadership over young EDL supporters. He has been convicted of threatening behaviour and possession of a knife and received a nine-month prison sentence for affray. He was photographed attacking a journalist at a far-right demonstration outside a mosque, for which he received a caution for assault. And on top of that the police were able to point to “a pattern of behaviour between 2009 and 2010, which were overwhelmingly related to English Defence League protests, where Titus’ behaviour was deemed to be causing alarm or distress”.

This is the thug whose rights are supposedly being trampled on because he will be unable to attend EDL demonstrations or hang around mosques for the next three years. It is hardly surprising that Patrick Hayes’ apologia for Titus has been reproduced in its entirely on the EDL’s Casuals United blog.

Hayes also rallies to the defence of another EDL supporter, Shane Overton, who was given a Criminal ASBO in March after he was convicted of racially abusing a Muslim family following an EDL demonstration. Here too the individual’s past record was a decisive factor in the sentence. In imposing the Crasbo, the press reported, the court took into consideration Overton’s “33 previous convictions included other racially aggravated offending linked to his association with the EDL”.

Hayes wrote an article for Spiked about this case at the time. He not only condemned the imposition of a Crasbo on Overton but even defended the EDL hooligan’s democratic right to subject his victims to racist abuse:

“…. while he reportedly scared the family’s children, there is no suggestion he used violence in the attack. He didn’t throw punches at these individuals; only words. If we hope to live in an open and free society, feeling free to say what we think – even if it causes offence to some – is of primary importance. When the state has the power to deprive you of democratic freedoms because it disapproves of the ‘offensive’ words you use, this can have disastrous consequences upon the ability of all of us to speak freely.”

This article too was reproduced on an EDL website and applauded by the EDL’s supporters on its Facebook page.

Now, you might ask whether there’s any point in criticising arguments such as those put forward by Hayes, which most reasonable people would regard as completely barmy. YetSpiked contributors regularly appear on mainstream programmes such as Radio 4’s Moral Maze on the basis that they are provocative thinkers whose controversial views make for entertaining broadcasting. So this cranky sect does exercise some influence on public debate. And they are using that influence to frame a defence of far-right racists in the language of individual rights.