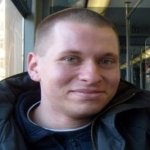 Edmund Standing has published the second part of his eGov monitor article on the BNP.

The opening paragraphs are an attack on the Muslim Council of Britain, although Standing evidently detests that organisation so much he can’t even bring himself to use its name. According to Standing, the MCB “deliberately fosters a sense of Muslim self-pity and a victim mentality (just as the BNP deliberately fosters white self-pity)”.

(You can just imagine how Standing would respond to a self-styled anti-fascist who attacked the Board of Deputies for fostering “a sense of Jewish self-pity and a victim mentality” and drew a parallel between the BoD and fascism.)

As any anti-fascist activist could tell you, the MCB has in fact long played a major role in combating the BNP by mobilising the Muslim community against it (see for example here, here, here, here and here). But Standing sees fit to ignore all that. He is clearly more interested in cranking out the anti-Islamist agenda of Harry’s Place than in actually combating fascism.

This is really divisive stuff and if anti-fascists were to take it seriously it would undermine a united fight against the BNP. In that connection, I’m surprised that a genuine and well-respected anti-fascist site like Lancaster Unity has seen fit to publish Standing’s article without even referencing the sharp criticisms that have been made of his warped analysis and bigoted views.