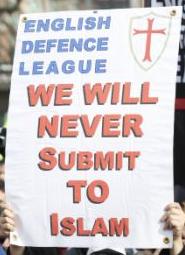 In the course of the interview Lennon engages in his usual lies and double-talk. He states piously that it is “a fact that I don’t hate Muslims”. However, he is later asked: “In your hometown, Luton, white Britons are actually an ethnic minority. Could that be soon the same for Europe as a whole?” Lennon’s reply is as follows:

It will be the same, it’s not it could be, it will be. Demographics, statistics, this is not scaremongering, this is facts. On average in Britain, the Muslim community has 5.6 children, the non-Muslims are having 1.3. Now that wouldn’t really be a problem if we didn’t have a problem with all these problems associated with it. Now in Luton white Britons are an ethnic minority, now that doesn’t actually bother me, in the home town I’ve grown up – in that it’s a multi-cultural town, and i believe I’ve benefited from that. But there’s a culture… with the Islamic community when we see the growth of Islam within that culture we see the negative things that come with it, and it’s changing the whole area, the rules, the law, the food, and a lot of things are changing – they are so different and these are the issue that need to be expressed. A lot of people are fearful, you see, the matter that you are talking about, a lot of people are worried, and we would be worried if when we looked to Islamic leaders, such as when we saw a different Islamic leader, the Iranian president, saying Islam will conquer Europe through the woman’s womb. These are not things that we are saying. You can go online and listen to even Shahid Malik in this country who was the second in charge of Gordon Brown. In a speech he said: “In 2001 we had one Muslim MP, in 2002 we had two, in 2005, we had six Muslim MPs, in 2010, we had 10,” and he says that within 20 years, every MP in this country will be Muslim. And in between saying each of these things, he says “Inshallah” which is “Allah is willing,” so what he’s saying is that Allah is will to take over our parliament, our government, and then he says within 30 years, “the prime minister of our country will share our faith.” Now that’s not what we’re saying, it’s what they are saying.

Contrary to Lennon’s claim, this is not facts at all but mindless scaremongering.

His assertion that in Britain “the Muslim community has 5.6 children, the non-Muslims are having 1.3” lacks any basis in credible evidence. Muslims do have a higher fertility rate than non-Muslims, but this is associated with cultural norms in their countries of origin and declines over time. A 2011 study by the Pew Research Center found that Muslims in the UK had on average 3 children in 2005-10, while the figure for non-Muslims was 1.8. The study predicted that by 2025-30 the birth rate for non-Muslims would remain at 1.8 whereas for Muslims it would fall to 2.5. These figures indicate that the Muslim community will grow rather faster than the non-Muslim population, but they fall well short of the fictitious statistics peddled by Lennon.

As for the assertion that “in Luton white Britons are an ethnic minority”, it is true that in the 2011 census people who defined themselves as white and English/Welsh/Scottish/Northern Irish/British made up 44.6% of the population (the figure for white people as a whole was 54.7%). However, the “white British” were still by far the largest ethnic group. Nor does this provide evidence of the Islamic conquest of Luton. The census showed that Muslims made up only 24.6% of the town’s population (compared with 47.4% who were Christians). Lennon fails to explain how Muslims could be “changing the whole area”, when over three-quarters of the population of Luton is in fact non-Muslim.

The headline to the RT interview is taken from Lennon’s equally misleading reference to a speech made by Shahid Malik at the 2008 Global Peace and Unity event, at which time Malik was Labour MP for Dewsbury and had just been appointed Parliamentary Under-Secretary of State at the Ministry of Justice. (Quite what Lennon means by “second in charge of Gordon Brown” is unclear – the post of Parliamentary Under-Secretary is a relatively junior one and Malik’s boss was the Secretary of State for Justice, Jack Straw.)

In his 2008 speech Malik referred to the number of Muslim MPs increasing from one to two to four and then possibly eight, before adding “at this rate the whole parliament will be Muslim”. You can watch Malik’s speech here, and as you can see (from 5:45 on) he intends that comment to be a joke. He’s taking the piss out of those who promote paranoid nonsense about a Muslim takeover of the UK. Malik went on to argue, more seriously, that it was realistic to aim for twenty Muslim MPs and he raised the possibility that within another thirty years or so we might even see a Muslim prime minister.

That hasn’t prevented the far right, including the EDL, from repeatedly using Malik’s speech to justify precisely the paranoid Islamophobic nonsense that he was mocking.

When he addressed an EDL protest in Dewsbury in 2011, Lennon himself (video here, from 5:25) used Malik’s comments as a dire warning of the threat posed by the Muslim community: “What he’s saying is that Allah is willing them to take over our democracy.” Responding to Malik’s prediction that there might one day be a prime minister who shared his faith, Lennon declared: “We’re in Dewsbury, Shahid Malik, we’re in your backyard. We’re here to tell you England is awake. England will never have a Muslim prime minister…. Did you think we’d stand there while you take our country from within? No we wouldn’t.”

These days Lennon has changed his Twitter handle from @EDLTrobinson to @TRobinsonNewEra‎. It’s quite clear that the “new era” doesn’t involve any break with the old ignorance and bigotry.