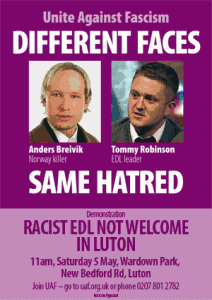 EDL News has the details. According to leaked documents they have acquired, at a meeting of the English Defence League and the British Freedom Party in February it was agreed that EDL leader Stephen Lennon (“Tommy Robinson”) would become deputy leader of the BFP, currently led by former UKIP parliamentary candidate Paul Weston.

This follows on from the political alliance declared by the EDL and BFP last November. The intention is to announce the decision at a press conference in Luton on 5 May before an EDL demonstration in the town later that day.

Another document leaked to EDL News discusses the policies to be promoted by the organisation. These include:

A new appeal for funds will be posted online, emphasising that the party expects to receive a £50,000 donation from a wealthy supporter. It is also proposed to call the organisation simply British Freedom, as BFP is “too closely sounding to BNP”.

Hope Not Hate describes this new development as “a hammer blow to Nick Griffin” which “probably signals the end for the British National Party” – presumably on the grounds that British Freedom is likely to replace the BNP as the main political force on the far right. Indeed, HNH asserts that British Freedom has “the potential to be far more dangerous than the British National Party” because “a strong anti-Muslim message has a far wider appeal in society than the old style racist politics of the BNP” (which rather overlooks the fact that the BNP itself has spent the past decade playing down traditional racism and whipping up Islamophobia instead).

Nobody wants to underestimate the political threat posed by groups like the BFP, but I think this is an exaggerated view of British Freedom’s prospects of winning popular support. The BFP’s present strength is indicated by the fact that it is standing only 6 candidates across the whole of the UK in next month’s council elections, compared with 137 by the BNP, 91 by the English Democrats (which includes a number of former prominent BNP members) and even 35 by the National Front.

Evidently the alliance with the EDL has so far failed to provide any great expansion of the BFP’s activist base, and there is little reason to suppose that the new closer link between the two organisations will significantly change the situation. For most EDL supporters, political activity consists in turning up for the occasional anti-Muslim protest, getting tanked up in a pub before the event and then swaggering drunkenly through the streets chanting “Allah is a paedo” before returning to the pub to get even more pissed. Few of them will be attracted by the mundane electoral work of delivering leaflets, door-knocking and telephone canvassing while stone cold sober.

Some have suggested that the EDL-BFP lash-up is an example of the classic fascist strategy of building a movement with a physical force and an electoral wing. The theory behind the strategy is that by showing you control the streets and can intimidate your opponents you win admiration as a powerful movement that will be able to impose order on society and this translates into increased votes.

But this strategy is based on the successes of Mussolini and Hitler in situations of extreme economic, social and political crisis, where large numbers of people turned to the leadership of the far right out of sheer desperation. No crisis of such proportions has occurred in Britain and despite the current economic problems there is no sign of it doing so any time soon. Consequently when the far right takes to the streets of the UK with a mob of racist thugs this doesn’t impress people with the strength of the organisation and boost electoral support. Quite the opposite – voters are repelled by a movement whose public face is that of a gang of violent hooligans.

The BNP began to make electoral gains only after it ditched this approach in favour of the “suits not boots” strategy, abandoning confrontational marches and cultivating an image of political respectability. The EDL represents a reversion to the old “march and grow” methods of the far right, and when it comes to winning votes there are no grounds for believing that this will prove any less counterproductive than it has in the past.

The threat posed by a political party such as the BFP backed by a thuggish street movement like the EDL is not that it is likely to win enough support to make a significant electoral breakthrough. Rather its role is to promote an Islamophobic ideology which results in acts of racist abuse and violence on the ground and even threats to emulate the Norwegian mass murderer Anders Breivik. If British Freedom does raise its profile and increase its influence as a result of Stephen Lennon’s recruitment to the leadership, the main impact will be the further encouragement of anti-Muslim thuggery in the communities rather than the winning of political representation in the town halls.