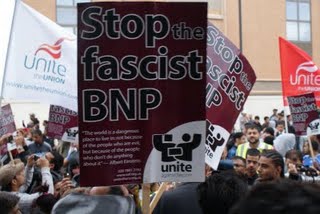 The planned demonstration by anti-Islamic thugs at Harrow Central mosque on September 11 was a spectacular flop thanks to an impressive mobilisation by the Islamic community and anti-fascist supporters.

The first group of anti-Islamists to catch sight of the mosque soon realised that they were no match for the 1,500 people already gathered there and quickly took flight, racing at impressive speed through the car park of the nearby Harrow Civic Centre with hundreds of anti-fascists on their tails.

Others never got to the mosque and one group’s demonstration was confined to a pub in Harrow town centre, where they were complaining plaintively to surrounding police about being denied their right to protest.

Soon the Stop Islamisation of Europe (SIOE) group, which was one of the main organisers, was announcing that its action was being called off and the still-complaining pub protesters were being marched under heavy police escort back to Harrow Tube station.

This humiliation, however, should not blind us to the fact that these groups are extremely dangerous and that they have no reservations about using physical violence against Muslims, anti-fascists, trade unionists and anybody else who stands in their way.

The SIOE group is even calling for a boycott of goods from Islamic countries and from Western companies like KFC which are deemed to be too friendly towards Muslims.

The one concern I have over the events in Harrow is that, despite some mobilisation by the regional TUC, trades councils and individual unions, the labour movement was not represented in the numbers one would wish.

It is one thing to condemn these dangerous groups but words are not enough – bodies have to be put on the front line as well.