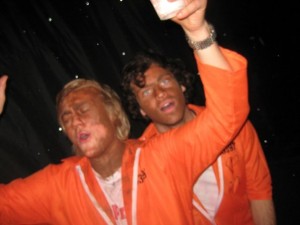 Students who dressed up as prisoners from Guantanamo Bay and “blacked-up” their faces for a Christmas party have been accused of racism.

The students, part of the rugby team from the London School of Economics (LSE), were in costume for the annual “carol” last Friday, an “all-day drinking” event organised by the university’s Athletics Union. They wore orange jumpsuits, with some painting their faces brown and drawing on beards.

At around 1pm, outside the Student Union bar, in full public view, they proceeded to imitate Muslim prayer while other team members dressed as American soldiers shouted orders at them. It took place just as Muslim students were leaving the nearby Old Building after Friday prayer.