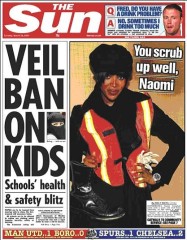 Veils will be banned in schools to help pupils learn and to keep them safe, Education Secretary Alan Johnson has ruled.

His decision will affect thousands of Muslim girls who wear clothing like the full niqab. He will publish details of his guidance to headteachers in the Commons today. The wearing of full-length robes may also be affected.

A source said: “Veils mean teachers can’t see the face. It’s a problem for security and it’s also a problem for learning because the teacher can’t see whether or not a child is understanding what’s being taught. A full face veil means you can’t see who the person is.”

Ministers will say it is also dangerous under health and safety regulations. A Bunsen burner could easily set light to a face veil in a science lab, Mr Johnson will point out.

School heads will be told to consult parents before going ahead with the ban. They will tell parents they CAN uphold religious traditions provided they do not put security and learning in jeopardy. The rules will also apply to faith schools.

But Mr Johnson is convinced there will be no serious opposition to the move.

In an editorial comment the paper welcomes a ban, asserting that the niqab is “divisive” and “provocative”.

The Guardian reports that this news was “leaked in advance to the Sun by Mr Johnson” – which gives you some indication of the audience he hopes his policy will appeal to, and how he wants to spin it. He’s certainly won the admiration of one BNP blogger, who hails Johnson’s proposals as “Some good news for once!”

See also the BBC poll on whether the veil should be banned in schools.