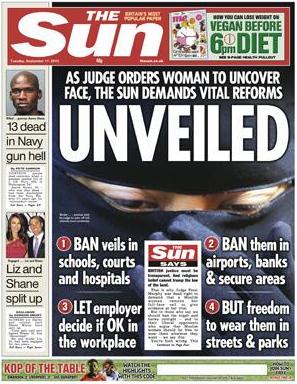 This is the front page of today’s Sun. The accompanying editorial is behind a paywall so we reproduce it below.

In contrast to yesterday’s rant by Trevor Kavanagh, the editorial strikes what is, for the Sun, a tone of reasoned moderation.

It comes out firmly against a complete ban on wearing the veil in public, though that stance is hardly going to have any impact on the rights of Muslim women, given that there isn’t the slightest prospect of such a law being introduced in the UK for the foreseeable future.

The Sun even admits that women who wear the veil are not necessarily oppressed or acting under compulsion: “While the Taliban used the burka to suppress women in Afghanistan, those wearing them here are mainly young – and doing so by choice. They see physical modesty as key to their faith. And they already feel ‘liberated’ … from being judged on their appearance.”

But this is just liberal window-dressing for a number of proposals for greater restrictions on Muslim women’s right to dress as they choose, including a ban on the veil in hospitals, schools, airports and banks, along with the right of bosses to sack a niqab-wearing employee if her choice of clothing “makes customers uneasy”.

In the Sun‘s view, yesterday’s judicial ruling that a Muslim woman must remove her veil when she gives evidence in court doesn’t go far enough, and she should have been banned from wearing the niqab throughout the court proceedings. For the Sun, there is a “clear-cut” argument here: “Judges, juries and lawyers should be able to see defendants’ or witnesses’ faces.”

Of course, if it were to apply that principle consistently, the paper would be demanding that blind people should be rejected for jury service and denied appointment as judges or the right to work as barristers. But don’t expect the Sun to be launching a front-page campaign for that any time soon.

BRITISH justice must be transparent. And religious belief cannot trump the law of the land. That is why Judge Peter Murphy was dead right to demand that a Muslim woman remove her full-face veil to give evidence at her trial.

But to those who say we should ban the niqab and burka outright – and to their liberal opponents who say Muslim women should be free to wear them wherever they please – we say this:

You’re both wrong. This national debate is more complex than either extreme allows for. Yes, open justice and our security are vital. So is Britain’s proud tradition of tolerance that sets us apart from other nations.

We make these four points:

1. The argument for lifting the veil in court is as clear-cut as it gets. Judges, juries and lawyers should be able to see defendants’ or witnesses’ faces. We believe Judge Murphy should have ordered the defendant to uncover her face during OTHER evidence and not just hers. The Sun also believes niqabs have no place in hospitals or schools. It is important for a patient to see a nurse’s face, just as it is for a teacher to see a pupil’s.

2. We would ban veils in other areas too, such as airports and banks, where covered faces are a security threat. Banks won’t tolerate customers in crash helmets. The same should apply with the niqab.

3. There is a greyer area around the rights of those Muslim women whose job entails serving the public. Here we side with their employer. If the full veil makes customers uneasy, that can damage a business – and the firm should have the right to expect her to remove it.

4. Many would ban veils from being worn even in the street, as they are under France’s draconian law. The Sun believes that in a British street people should wear what they like.

UKIP’s Nigel Farage sees veils as divisive. He has a point. But banning them would be more divisive.

Others see them as the tools by which Muslim men repress their women – and wish to liberate them. But the evidence suggests British Muslim women do not need liberating.

While the Taliban used the burka to suppress women in Afghanistan, those wearing them here are mainly young – and doing so by choice. They see physical modesty as key to their faith. And they already feel “liberated” … from being judged on their appearance.

So in this important debate over veils it is crucial to hear from the silent minority who wear them. It is equally vital to reconcile their wishes with the nation’s without being swayed by political correctness.

We believe there are valid reasons to ban veils in certain places. But Britain is a liberal democracy. We should not impose laws telling Muslim girls and women what they can and cannot wear in the street.