The accusations against Profesor Ramadan in the main article, by Anthony France, are mainly lifted (without acknowledgement) from a piece by Daniel Pipes written to justify Ramadan’s exclusion from the US in 2004 (see here). Pipes’ accusations were systematically demolished by Ramadan himself at the time (see here). The other accusations in the Sun article are taken from the discredited Steve Emerson (see here) – the “terrorism expert” who assured everyone that the 1995 Oklahoma bombing was carried out by Muslims. 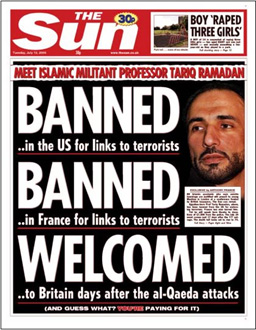 Why Here? Why Now?

A decision to invite an Islamic academic who justifies terrorism to a London conference provoked disbelief and dismay last night.

Professor Tariq Ramadan, an Egyptian-born Swiss citizen, will preach to young Muslims on July 24 – 17 days after the 7/7 outrage.

The visit by Ramadan – who has been banned from entering the US and France – is backed by £7,500-worth of funding from British taxpayers via the Metropolitan Police and the Association of Chief Police Officers.

But serving cop Norman Brennan, head of the Victims of Crime Trust, said: “Many will be horrified to learn that the Met and ACPO are funding an event where the speaker will be a man who believes suicide bombings are justified. The timing of this could not have been worse. Officers have spent the last five days picking up human remains with their bare hands.”

Security chiefs across the world have built up dossiers on Ramadan, 44.

Last year he was banned from entering the US after America’s Homeland Security Department said he had “endorsed terrorist activity”. In 1996 he was barred from France on suspicion of having links with an Algerian behind a terror campaign in Paris. In 1999 a Spanish judge declared that he had “routine contacts” with an Algerian al-Qaeda disciple.

Several times in recent years, Ramadan has justified terrorist acts. Asked by an Italian magazine if the killing of civilians is right, Ramadan replied: “In Palestine, Iraq, Chechnya, there is a situation of oppression, repression and dictatorship. It is legitimate for Muslims to resist fascism that kills the innocent.” Asked if car bombings against US forces in Iraq were legitimate, he said: ‘Iraq was colonized by the Americans, resistance against the army is just.’

Terrorism expert Steven Emerson says: “The telegenic soft-spoken and charming professor is just the modern, westernised face of the same enemy that wears a different mask on other battlefields.”

Middle East expert Fouad Ajami said of Ramadan: “His moderate facade hides his radical heart. France has made up its mind on him.”

A French court recently said preachers like Ramadan “can exert an influence on young Islamists and constitute an incitement that can lead them to join violent groups”.

Ramadan denies there is any proof that Osama bin Laden – said to have studied with his dad Said – masterminded the 9/11 slaughter. And he minimises the Islamic atrocities of 9/11, Bali and Madrid by referring to them as “interventions”.

Ramadan, whose grandad founded the Muslim Brotherhood, fiercely denies any link to terrorism. And he lashed the London bombing fanatics by saying: “We must condemn these attacks with the strongest energy.” But former Met chief Lord Stevens fears the bombers may be intelligent young British Muslims sucked into the al-Qaeda web. And Ramadan will be addressing … intelligent young British Muslims.

He will speak at the lslamic Cultural Centre near Regent’s Park, central London. The conference is being organised by the Da’watul Islam charity, which caused outrage last year by inviting hate-filled Islamic cleric Yusuf al-Qaradawi to Britain.

The Met Police said: “Tariq Ramadan is a regular visitor to London and has spoken at many conferences as part of a debate into dealing with tensions in communities.”

ACPO spokesman Rob Becky, assistant chief constable of Herts, said: “Like The Sun, we believe we shall never be beaten. Part of that response must be open debate.”

As a Swiss national, Ramadan does not need a visa. But Home Secretary Charles Clerks has the power to exclude an Individual on the grounds of public safety.

A Home Office spokesman added: “Following information received from The Sun, we will be passing this case to the relevant people.”

The Sun Says: Abuse of Britain

Just five days since 7/7 – and the flagrant abuse of Britain’s freedom-of-speech laws is laid bare yet again.

This man’s suspected links with terrorists are strong enough for him to be banned from both America and France.

But in our bomb-hit capital he is being given a platform to speak – while the victims of Britain’s worst terror atrocity wait to be buried.

Ramadan is no ranting Abu Hamza or Omar Bakri. He’s more dangerous than that.

He is a soft-spoken professor whose moderate tones present an acceptable, “reasonable” face of terror to impressionable young Muslims.

In one breath he condemns the horrors in London and Madrid. But through seemingly reasoned arguments he justifies similar attacks where Muslims are oppressed.

Ramadan has muddied the waters enough for the Met and ACPO to believe him a reasonable man. They should not be fooled.

And rank-and-file bobbies, who reacted with such extraordinary courage last Thursday, will rightly be outraged if the Force has any involvement with him.

Sponsoring community projects is entirely laudable. Giving the oxygen of publicity to an apologist for terrorism is not. Especially with the Tube and bus bombings so fresh in our minds.

The police must pull the plug without delay. And Home Secretary Charles Clarke must move swiftly to ban Professor Ramadan from our shores.

We don’t need scholars justifying suicide bombers and analysing for us the grievances that drive them.

We don’t need lectures on understanding the monsters who slaughtered innocent Londoners.

You couldn’t make it up. Days after the carnage in London, it is revealed that the police are sponsoring a Muslim extremist who supports terrorism.

Between them, the Met and the Association of Chief Police Officers are donating £9,000 to a conference starring Swiss-based fanatic Tariq Ramadan at the Islamic Cultural Centre, near Regent’s Park.

Ramadan is banned from America by the Homeland Security Agency after a speech in which he justified suicide bombing.

Yet the poilce think he’s a fit person to, preach to young Muslims, in the aftermath of a terrorist atrocity in our capital city.

Admittedly, they didn’t know that Islamonazi nutters were going to slaughter London commuters last Thursday when Ramadan-a-ding-dong was booked for the gig. But that’s not the point. Our closest ally says he’s a danger. Shouldn’t that set some alarm bells ringing?

A Scotland Yard spokesman said: “We are not aware of the grounds on which Professor Ramadan was prevented from entering the US.” Well they damn well should be. Post 9/11, aren’t our intelligence services and police supposed to be in constant contact with their opposite numbers in the USA and Europe?

If Ramadan is considered too much of a menace to be allowed in to America, aren’t the British authorities just the teensiest bit curious as to why? It’s not as if he’s one of Donald Rumsfeld’s unknown unknowns. He’s got plenty of form.

Despite that, not only is he allowed into Britain but the British taxpayer, through the Old Bill, is picking up his exes.

I’m all for conferences which examine ways of reconciling different faiths and communities. But the charity behind this month’s gabfest is the same one which last year invited Red Ken’s friend Mustapha Jihad lo London, so he could share with us his enlightened views on suicide bombing, Jew-baiting, poof-burning and wife-beating.

It turns out that the Old Bill chipped in for that visit, too.

At this stage it is worth remembering that ACPO doesn’t actually have any money of its own. It is our money. And it shouldn’t be spent bankrolling lecture tours by Islamist rabble-rousers.

I wonder what those brave, dedicated officers who have spent the past few days sifting through corpses on the Underground make of their bosses’ benevolence.

Where the hell does ACPO get the idea that paying for fanatics to address conferences in London is any part of its brief?

There’s far too much appeasement in the name of multiculturalism and diversity.

Although I was one of Ian Blair’s most vociferous critics when he was scaling the greasy pole to succeed Lord Beaujolais as Commissioner of the Met, I’ve been prepared to give him the benefit of the doubt since he took over. Judge him on what he does, not job application, was my reasoning.

Since then, I’m afraid, the jury is not so much out as relaxing in the Magpie and Stump with a pork pie and a White Shield Worthington having returned a swift guilty verdict.

I’m reluctant to have a pop at the police after the magnificent way they responded to last Thursday’s bombings.

But they didn’t see it coming. And neither did the security services. That’s not necessarily their fault and I’m not sure it could have been prevented.

However, there is always the worry that because of Commissioner Blair’s obsession with diversity – fully encouraged by the Home Office and Downing Street – some stones are going unturned for fear of upsetting the “community”.

The law has been too soft on Islamist hatemongers. It’s not that long ago that the police were closing roads in Finsbury Park so that Captain Hook could peddle his venomous sermons to a congregation of sinister youths in Yasser Arafat headscarves.

Bunging nine grand to a conference starring a man barred from the USA for justifying terrorism defies belief. Whatever next? Are we going to have S019 offering firearms training at Hendon to would-be jihadists? How about the anti-terrorist squad organising a few bomb-making classes for beginners.

In the wake of the attacks on London, virtually all of us agree what must be done. Radical mosques must be shut down, Islamonazi “clerics” interned or deported, illegal immigrants rounded up and kicked, out, the “human rights” act repealed, our borders secured and undesirables refused entry.

What chance have we got when the police – the POLICE – are not only rolling out the red carpet for advocates of terrorism but actually paying for them to come here as honoured guests?

When Ian Blair said he wanted to recruit more Muslims, I thought he was talking about the police, not al-Qaeda.