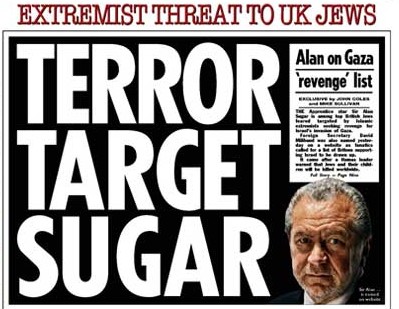 On the Ummah site, “Saladin1970” asks for help compiling “a list of those who support Israel”. “Abuislam” asks: “Have we got a list of top Jews we can target? Can someone post names and addresses?” Saladin1970 gives a link to the Power 100 list of top British Jews.

Mr Jenvey, 43, said: “The Ummah website has been used by extremists. Those listed should treat it very seriously. Expect a hate campaign and intimidation by 20 or 30 thugs.”

Today’s article in The Sun entitled “Hate hit list” represents the most insidious and inflammatory kind of demonisation of law-abiding, decent, British Muslims. Sadly it comes as no surprise to see that such libellous and defamatory piffle was published in the prokaryote of British newspapers. If the article wasn’t so offensive and damaging to community relations, we may have found it amusing that it took two journalists to compose such atrocious tabloid fodder; however this is a serious matter due to the clearly misleading nature of the article. It is extremely difficult to believe that The Sun has not deliberately set out to deceive its readers into thinking that British Muslims on our website pose a physical threat to prominent British Jews, whilst knowing full well that this is an outright lie.

The quotes that the article carries are from a thread on Ummah Forums entitled, “Compile a list of those who support Israel”. In the very first post, which sets out the theme and purpose of the thread, the user “Saladin1970” encourages other members to aid in compiling a list of British people who support Israel. He writes, “It would be beneficial to start compiling a list so that we can write polite letters reminding them of the injustices of Israel and to stop supporting Israel.” Later in the thread, the user “Abuislam” asks if any names and addresses have been posted up yet in . Further along the discussion still, the original user suggests that rather than contacting those listed directly, it may be a better idea to contact Muslim organizations and individuals involved with them and encourage them to boycott said individuals.

Clearly, most people will realize that this thread is about a peaceful form of campaigning against the state of Israel by writing “polite” letters to well-known and wealthy supporters of the state asking them to withdraw that support and encouraging Muslims not to do business nor work with them until they do. Furthermore, boycotting supporters of Israel is not a new form of protest against the systematic and brutal state terrorism carried out against the Palestinian people, and neither is it a violent, threatening nor anti-Semitic action.

Examining the adjectives used in The Sun’s article gives us an undeniable insight into their intent in publishing this piece; the words “hate”, “hit list”, “hate-filled”, “extremists”, “terrifyingly”, “fanatics”, and “deadly” all appear in the short article. The article mentions anti-Semitic attacks on Jews in Europe, quotes a statement from a figure in Al-Qaeda saying Muslims should attack targets wherever they can, alleges that Hamas call for the killing of Jewish children by saying Jewish people should be targeted anywhere and mentions attacks including an arson raid on a Synagogue. Discerning readers will be able to see this for what it is: a despicable attempt to paint law-abiding, Muslim peace activists – who are campaigning against Israel’s actions – as criminal, murderous, anti-Semites, and terrorists. By using the language and imagery of hate and fear, they are instilling these feelings towards Muslims in the hearts and minds of their readers, and this has been an obvious feature of The Sun newspaper for many years.

The Sun should feel thoroughly ashamed of featuring such misleading articles that adds fuel to the fire of community tensions, which increases the misunderstandings, the ignorance and the fear between people of different backgrounds, faiths and political persuasions at a time when mutual understanding and respect are so essential. Ummah Forums is based on the premise that through dialogue and mutual exchange of sometimes drastically different and even diametrically opposed ideas, people from all parts of the world can come to understand each other and if unable to become friends, they can at least be friendly by recognizing their shared humanity. Ummah Forums is a non-sectarian platform, which allows users regardless of who they are and what their beliefs are to participate in discussions, and that is what makes it one of the most popular online discussion forums. We have regular users who are atheist, agnostic, Christian, Jewish and other non-Muslims, as well as Muslims of all backgrounds. We even have many users who are regular viewers of The Apprentice, and a number of threads about the programme including one which spans over 34 pages, so contrary to what The Sun suggests with its headline “Terror target Sugar”, Sir Alan Sugar certainly has nothing to fear from users of our website!

Like most Muslims, and a great number of non-Muslims across the world, many of our users are currently engaged in various kinds of protest and campaigning against the massacre of Palestinian civilians by the Israeli Forces. Yet despite this, anyone logging onto www.ummah.com/forum today would still see that we have registered users who are pro-Israeli Jews engaging in debates with Muslims users about what is currently happening in Gaza. This is just one testament amongst many to the fact that The Sun’s characterization of us as a “fanatics’ site” is an outright lie and we demand a complete, unequivocal retraction and apology for the article under discussion, printed in an equally prominent position of the paper as the original.

Finally, we feel that the killing of over 40 Palestinians in an UN-run school in the Gaza Strip by the Israeli army yesterday deserves far more attention from readers of any newspaper than a benign thread on a discussion forum. May Allah grant them, and all the victims of Israel, justice and eternal peace.

1. Ummah Forums is a non-sectarian platform, which allows users regardless of who they are and what their beliefs are to participate in discussions.
2. For more information please contact Ummah.com on 0709 2020521