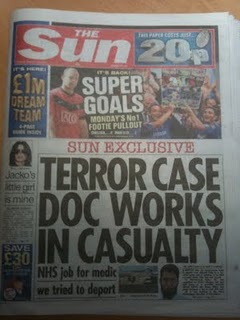 A doctor accepted “substantial” libel damages at the high court today over false allegations in the Sun linking him to terrorism. Dr Mohammed Asha, who is based in the Midlands, launched legal action after the Sun carried a front page article last August under the heading “Terror case doc works in casualty”.

Leo Dawkins, the solicitor representing Dr Asha, told Mr Justice Eady in the high court in London today that the allegations were that “there were very strong grounds to suspect that the claimant would be involved in the future in terrorist bomb plots and was, therefore, an ongoing threat to national security”.

He added: “There is no truth in these allegations whatsoever. The article complained of was published to millions of people and has been devastating for the claimant, causing him immense damage both personally and professionally.”

Dawkins said the defendant, News Group Newspapers, the News International subsidiary that publishes the Sun, “accepted that the allegations complained of were entirely false and without foundation”. The defendant had offered to pay Dr Asha “substantial compensation and his legal costs”.

Patrick Callaghan, solicitor for NGN, told the court: “The defendant offers its sincerest apologies to Dr Asha for the damage it has caused and is pleased to set the record straight.”

Dr Asha said in a statement: “The damage caused by The Sun has been incalculable, causing both myself and my family immense hurt and distress, not to mention worries over my own personal safety. I am glad this terrible ordeal is finally over and that The Sun has apologised and agreed to pay me compensation and my legal costs.”