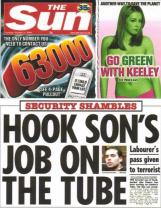 “The terrorist son of hook-handed Abu Hamza has been working on London’s Tube, The Sun can reveal. Mohammed Kamel Mostafa, 25 – a convicted fanatic who has glorified suicide attacks like the 7/7 slaughter – was rumbled by Underground workmates when they saw his picture in The Sun.

“They went straight to bosses, who told Mohammed Kamel Mostafa, 25, to sling his hook. But last night fury erupted over the security shambles that led to the convicted terrorist being granted astonishing access to London’s Tube network.”

The “convicted terrorist” label stems from the fact that Mohammed Kamel Mostafa served three years in prison in Yemen from 1999-2002 for a terrorism-associated offence. Regarding this case, the US State Department wrote:

“Eight Britons and two Algerians who were arrested in December 1998 were tried from February to August 1999 in Aden on charges of possessing illegal weapons and explosives and conspiring to commit terrorist acts. The 6-month trial did not meet minimum international standards for due process. Defense lawyers claimed that the prosecution lacked adequate evidence, and that the defendants were tortured, sexually abused, and denied access to their lawyers….”