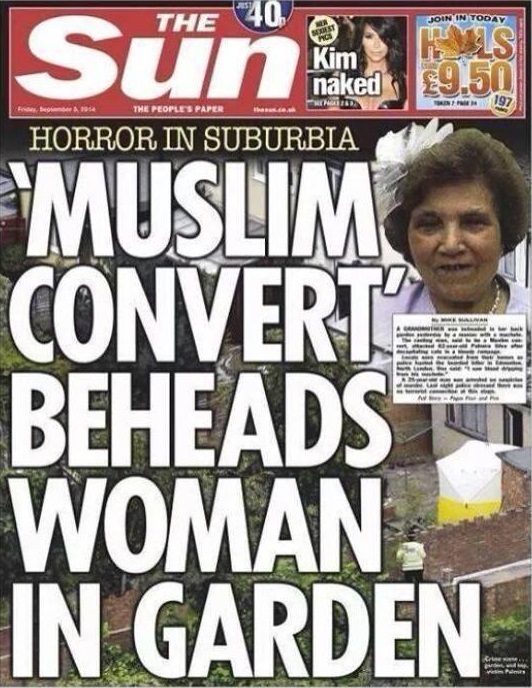 This is how today’s Sun saw fit to report the horrifying murder of Palmira Silva in Edmonton yesterday.

Update:  The Sun‘s report quoted an anonymous “insider who worked with the suspect” as saying: “He converted to Islam around April time. One of his parents was Muslim and he grew his beard and talked about praying. He would talk about how good it was all the time. He put on a robe and prayed even when he was at work.”

Although other papers such as the Evening Standard immediately seized on the “Muslim convert” angle, the details of this supposed conversion are unclear.

The Telegraph quoted a former employer of Nick Salvadore, the man charged with the murder, as saying that that Salvadore “told me in passing he’d turned to Islam, about five years ago. But he wasn’t in your face about it. He didn’t try and convert others or talk about religion and politics at all.” The Mail reported a friend of Salvadore’s as stating that “he is from a Muslim background but he is not a good Muslim – he gambles, plays roulette”.

Nor has anyone managed to establish a link between Salvadore’s religious beliefs and the crime with which he has been charged. The original Sun article tried to suggest a connection by pointing out that the killing “follows the brutal beheadings on video of two US journalists by IS jihadists”, but added that police had “stressed there was no evidence of a terrorist connection”.

Last month there was a no less horrific murder in Italy, by a former atheist who had “recently discovered his Jewish heritage and immersed himself in religious texts”. Nobody thought of reporting that killing under the headline “Jewish convert beheads woman”.