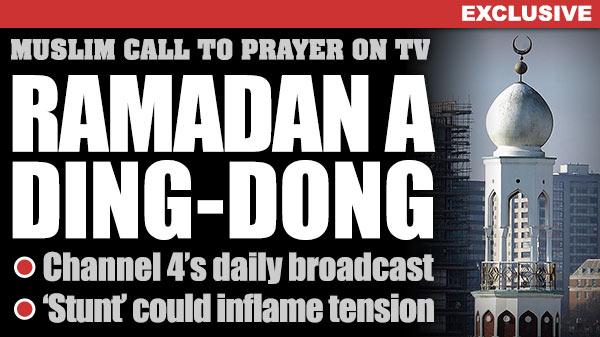 The Sun reports: “Channel 4 yesterday said it will screen a Muslim call to prayer every day during Ramadan – because it is more relevant than the Diamond Jubilee.” The report helpfully adds: “Radical preacher Anjem Choudary, accused of encouraging terrorism, said he welcomed any move to promote Islam.”

The Sun quotes a UKIP spokesman as warning that the decision “will inflame community tension”. With coverage like that in the Sun, it very probably will.

The Daily Mail has a rather less provocative report, headlined “Channel 4 to broadcast daily Muslim call to prayer during Ramadan next month”.

Not that this prevents the article from prompting the usual succession of Islamophobic comments from readers, starting with “i will never watch channel 4 again, this is a christian country”, followed by “It seems with every Islamic atrocity that takes place, instead of Islam being exposed for what it actually is… and we all know exactly what it actually is, despite what we are constantly told… it is pushed further into our faces by those who have the power to do so, the grovelling Islamophiles…”

And those are just the first two comments.

The Mail spoke to National Secular Society president Terry Sanderson about Channel 4’s plan, probably anticipating some hostile reaction. However, to be fair, Sanderson’s response is quite balanced, supporting the right of minority faiths to be given TV coverage, while understandably expressing some scepticism about Channel 4’s motives. He told the Mail:

“It seems reasonable that there should be some acknowledgment on TV of the needs of the growing Muslim population in Britain, although one can’t help wondering whether this is just another of Channel 4’s publicity-seeking stunts.

“Given that the BBC devotes hundreds of hours a year to Christianity, with two or three church services every day on its radio stations, and hardly any mention of minority religions, a few minutes devoted to Islam doesn’t seem unreasonable.”

Islamophobia Watch agrees with the National Secular Society. Now that really is news.

Update:  Here is an example of the sort of campaign launched in response to the 4Ramadan coverage. At first I thought it was satire. (I’m still not sure.)