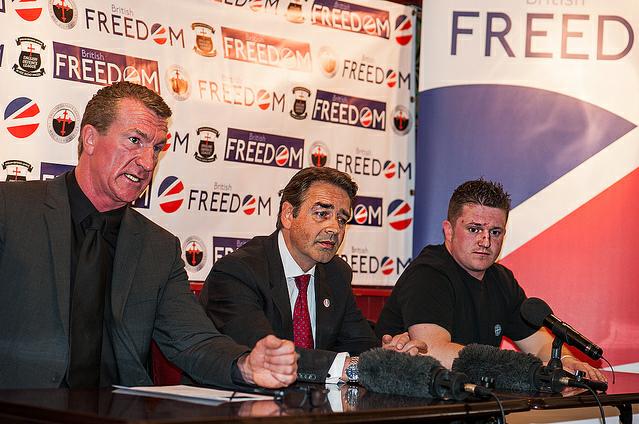 Paul Weston (centre) in 2012 with the then co-leaders of the EDL, Kevin Carroll and Stephen Lennon

A Youtube video of a parliamentary candidate declaring he is a racist has taken the internet by storm.

The astonishing video, which sees Liberty GB leader Paul Weston claiming the UK needs to mount a ‘defence’ against Islam has had more than a quarter of a million views. He says he wants to avoid a ‘civil war’ in the UK and is ‘prepared to be called a racist’ in order to do so.

The video begins with Mr Weston simply stating “Hello, my name is Paul Weston and I am a racist”. It continues as he lists a number of political parties who class him as a racist while he stands on the bank of the Thames with the O2 arena in the background. He says he feels the UK is under a “terrible threat” and rails against former Prime Minister Tony Blair for “undermining” Britain.

More than 260,000 people have viewed the seven-minute clip where he blasts: “If I want to defend what I grew up in what I was born into – my country, my British culture, my heritage and my history I am apparently a racist.”

Mr Weston’s blunt approach is echoed in other videos on YouTube. Uploaded through the Liberty GB account, the party’s other controversial clips include Paul Weston calling Prime Minister David Cameron a “traitor” while speaking outside Downing Street.

Another video talks of his arrest while he was quoting Winston Churchill in Hampshire.

While other clips have attracted just a few thousand views, the “My name is Paul Weston, and I am a racist” video has been spread far and wide on social media.

On its Facebook page, the party says “Liberty GB is a patriotic counter-jihad party for Christian civilisation, Western rights and freedoms, British culture, animal welfare and capitalism.” Former UKIP candidate Mr Weston, who is married to a Romanian, added: “I don’t dislike foreign people – what I do like is my country, my culture and my people and I see that under a terrible threat at the moment.”

Weston formed the party in 2013. He left UKIP to create the British Freedom Party, which was aligned with the English Defence League, before starting Liberty GB.

Mr Weston was unavailable for comment. The Express has also contacted a number of anti-racism organisations for comment.

Weston was last seen in public speaking at an EDL rally at Downing Street last month, where he declared that the terrorist movement ISIS is directly inspired by the example of the Prophet Muhammad.

As for the accusation that Weston is a racist, which he mocks in his Youtube video, it would appear to be soundly based. He is, after all, the author of an article entitled “Ethnically cleansing the English” which begins with the following quotation:

“A West which has not yet understood that whites, in a world become too small for its inhabitants, are now a minority and that the proliferation of other races dooms our race, my race, irretrievably to extinction in the century to come, if we hold fast to our present moral principles.” 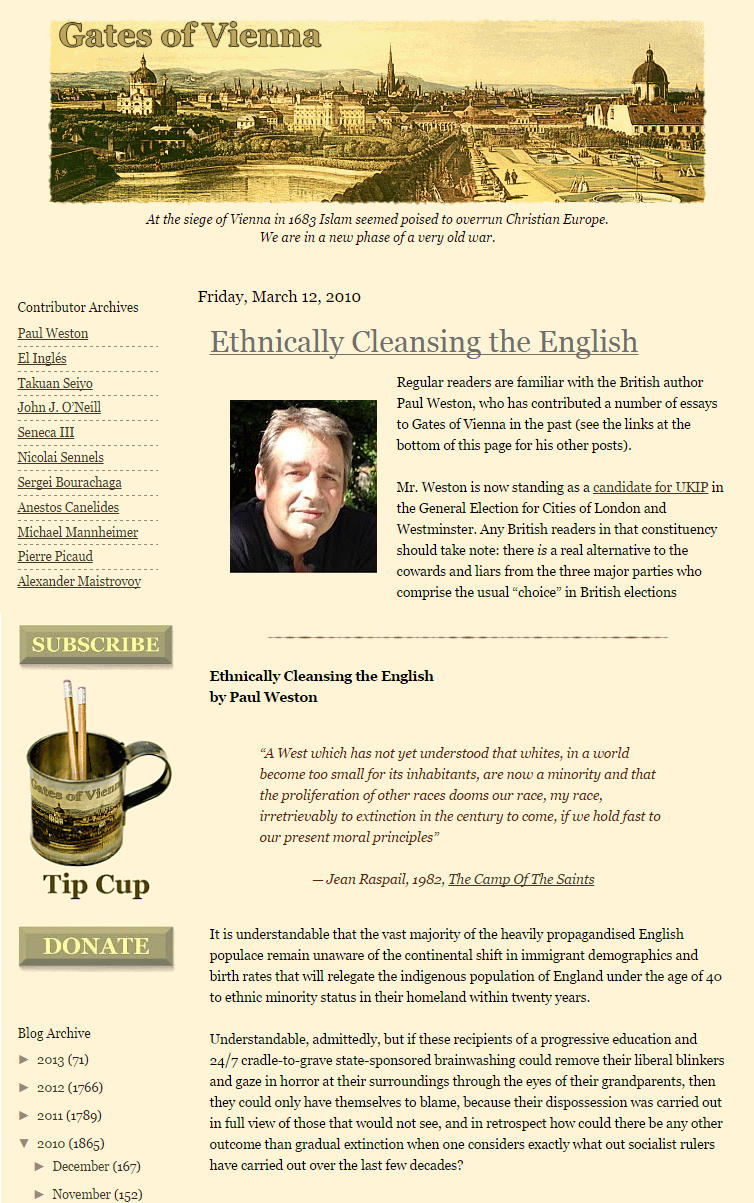