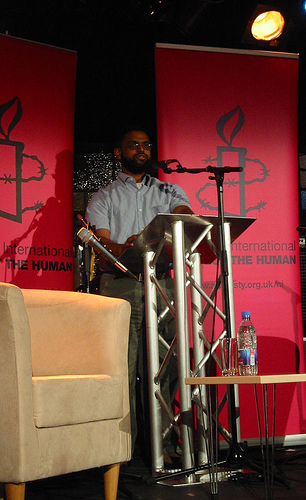 A senior official at Amnesty International has accused the charity of putting the human rights of Al-Qaeda terror suspects above those of their victims.

In an email sent to Amnesty’s top bosses, she suggests the charity has mistakenly allied itself with Begg and his “jihadi” group, Cageprisoners, out of fear of being branded racist and Islamophobic.

Sahgal describes Begg as “Britain’s most famous supporter of the Taliban”. He has championed the rights of jailed Al-Qaeda members and hate preachers, including Anwar al-Awlaki, the alleged spiritual mentor of the Christmas Day Detroit plane bomber.

Gita Sahgal is a member of a nutty group called Women Against Fundamentalisms. In a 2006 radio programme she defended the view that by consulting the Muslim Council of Britain the government was encouraging fundamentalism. In the same radio programme she also accused Tariq Ramadan of being a fundamentalist. Had she actually read any of his books, Professor Ramadan politely inquired. It was quite clear that she hadn’t. In fact she was completely unfamiliar with his writings. However, she did know that he was a fundamentalist.

It appears that Sahgal has now been suspended by Amnesty. Their mistake was in ever employing a crank like that in the first place.