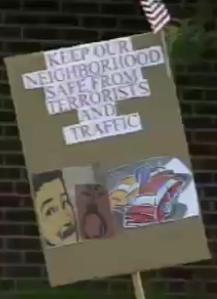 The Midland Beach mosque controversy [see here and here] recently expanded to the pages of Facebook, when people identifying themselves as members of the Class of 2011 of Susan E. Wagner High School in Sea View created a group on the social networking site called “Supporters of New Mosque in Staten Island“, which by late this morning had grown to 151 members.

One of them, Zara, wrote that she cannot understand “why there is this fear, this hate toward an entire society and it is provoked blindly.”

“I did not create this group to call your neighborhood bigots or racists,” she wrote. “I don’t believe that’s true in any respect…. I grew up in that area. Now, my case may be somewhat different because I moved away before 9/11 and that’s when Islamophobia was born.”

Islam Allan, identified as one of the administrators of the group and wearing a headscarf in her Facebook photograph, responded to a message from a person named Johann Conrad, who wrote on Monday: “Go back to your own country. You don’t belong here. Just get out. We don’t want you here.”

Ms. Allan replied: “This IS my country. I was born here,” adding that a mosque is “a place of worship, just as a church or synagogue might be.”