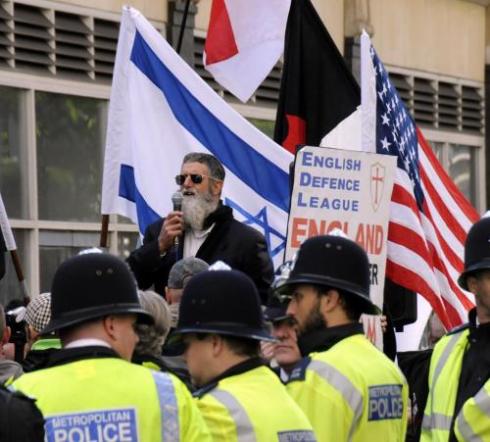 Around 300 members of the far right organisation the English Defence League (EDL) were joined by a US Rabbi associated with the Tea Party at a demonstration “to oppose Islamic fascism”.

Speaking outside the Israeli embassy in London, Rabbi Nachum Shifren stressed he was not here to represent the Tea Party but came as someone “who loves freedom”.

Rabbi Shifren, who is standing for the California state senate, said: “To all my Jewish brothers who have called me a Nazi… I say to them they don’t have the guts to stand up here and take care of business.”

The so-called surfing rabbi said the EDL were the only group in England with moral courage and that politicians would not admit that “because of the Arab petrol dollars”.

Rabbi Shifren added that Muslims “eat each other alive, like the dogs that they are”. He said: “We shall prevail, we will not let them take over our countries. We will never surrender to the sword of Islam.”

Over at Atlas Shrugs, Pamela Geller hails the alliance between Shifren and the EDL as “part of the growing interaction between the EDL and the counter-jihad movement in the US that I enthusiastically support”.